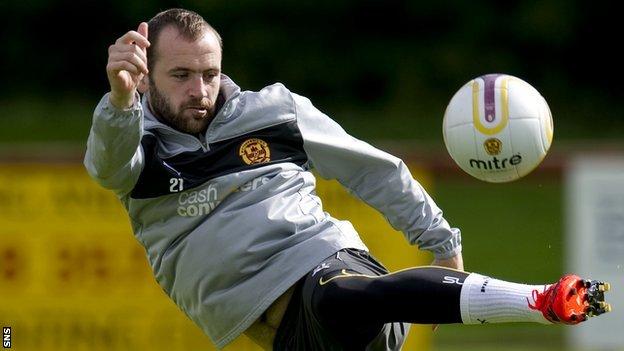 Motherwell assistant manager Kenny Black is unsure if the club are in a position to offer former player James McFadden a contract.

McFadden has been training with the Steelmen for the past few weeks after his short-term deal at Sunderland came to an end.

The Scotland cap also trained with 'Well before joining the Black Cats.

"He is keeping himself ticking over, a local lad, and we're happy to have him on board," said Black.

"James has come in very similar to what he did a few months back. He came in looking for training facilities.

"We are more than willing to accommodate him. James came in, got himself fit and got himself a move to Sunderland.

"He is now back up and it's really much of the same. That's as far as it goes, nothing has changed from the last time he was here."

He made three substitute appearances at Sunderland and has not started a match since his last game for Everton in May.

"I don't know the finances in regards to if we can offer him anything," explained Black.

"I do know that we have lost Jamie Murphy and brought Kallum Higginbotham in and we have a lot of frustrated players at Motherwell.

"Bob McHugh did tremendous during the week and scored a hat-trick for the under-20s.

"Whether we can accommodate James McFadden will probably be for the chief executive to deal with.

"We are certainly happy to have him in because he is well-liked around the place."

One current Motherwell player who would like to see McFadden return to Fir Park on a permanent basis is Nicky Law.

"He's a top, top player, you can see that in training," said Law. "It would be a huge boost if we could get him.

"You could look towards someone like that to pick you up extra points as the season goes on."