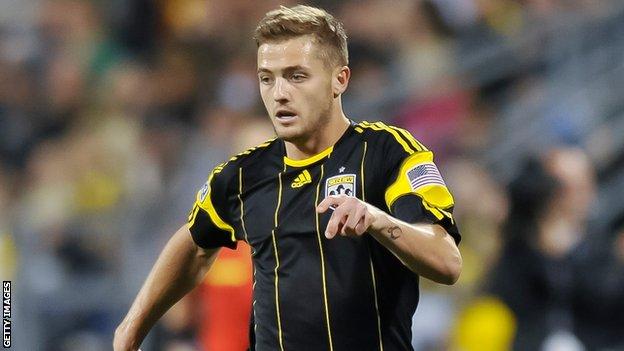 United States and ex-Leeds United winger Robbie Rogers says he is "stepping away" from football after announcing he is gay.

Rogers, 25, who was released by Leeds in January after a loan spell at Stevenage, is only the third footballer to publicly declare his homosexuality.

"I always thought I could hide this secret. Football was my escape, my purpose, my identity," said Rogers.

"Now is my time to step away. It's time to discover myself away from football."

The Football Association said it would fully back Rogers, regardless of whether he continues his career.

We do have players who've said that, while they are gay, they don't feel comfortable enough to come out

The California-born player, who won 18 caps for his country, made the announcement in a message posted on his personal website on Friday.

"For the past 25 years I have been afraid, afraid to show who I really was because of fear," said Rogers.

"Secrets can cause so much internal damage. People love to preach about honesty, how honesty is so plain and simple. Try explaining to your loved ones after 25 years you are gay.

"Football hid my secret, gave me more joy than I could have ever imagined… I will always be thankful for my career.

"[Now] my secret is gone, I am a free man, I can move on and live my life as my creator intended."

Only two other footballers have publicly said they are gay, despite a number of high-profile male and female homosexual athletes from other sports openly discussing their sexuality in recent years.

In 1990, former England Under-21 international Justin Fashanu was the first professional footballer in Britain to reveal he was gay. He took his own life eight years later, aged 37.

Darren Bailey, the FA's director of football governance and regulation, added: "Following the announcement by Robbie Rogers on Friday, the FA is trying to make contact with him offering our support.

"Whether Robbie stays in the game or steps away for a break he has our full backing."

The FA last year launched a six-point action plan to make the game more inclusive, as well as tackling homophobia and transphobia.

"We do have players who've said that, while they are gay, they don't feel comfortable enough to come out," said chief executive of the Professional Footballers' Association Gordon Taylor.

"It's not dissimilar to many black players, and we need to create a safe environment for them on and off the field.

"We know of players who are playing who are gay who've not had that confidence as yet. But, as the rest of the world becomes more civilised, hopefully that will come."