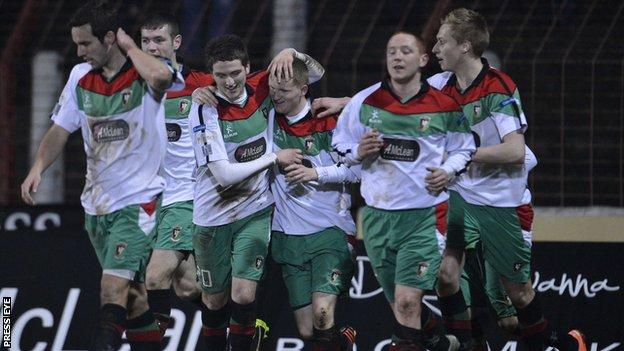 A second-half goal by Martin Murray proved enough to give Glentoran a 1-0 aggregate win over St Pat's Athletic in the first round of the Setanta Cup.

The other three Irish League teams all lost out to League of Ireland clubs.

Coleraine's game with Shamrock Rovers seemed to be heading for extra-time but Ciaran Kilduff scored late on the give the Dubliners a 2-1 aggregate win.

Cliftonville drew 2-2 with Cork but went out 6-2 overall while Portadown were hammered 5-0 at home by Drogheda.

That meant a massive 8-2 aggregate defeat for Ronnie McFall's Ports.

Glentoran's reward for their victory is a challenging clash with League of Ireland champions Sligo Rovers.

Sligo were one of the four seeds already through to the quarter-finals, the others being Linfield, Crusaders and Derry City.

Murray's winner for Glentoran was an overhead kick in the 62nd minute after an initial effort had been blocked.

Shane Jennings headed a good chance wide for Coleraine but Oran Kearney's men were hit by Kilduff's late winner for Rovers who won the All-Ireland competition on 2011.

Cliftonville were behind twice but pulled level through Liam Boyce and Stephen Garrett in the draw with Cork at Solitude.

Defender Alan Byrne headed Drogheda into the lead inside the first minute at Portadown.