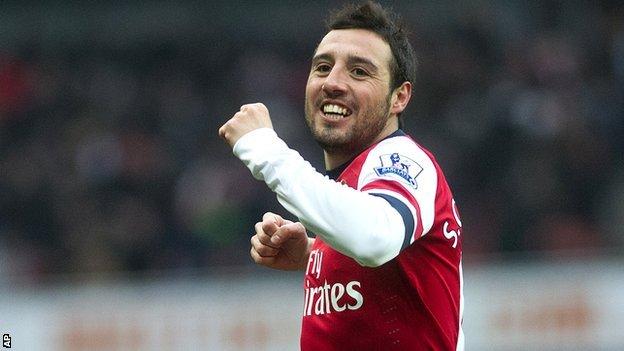 Cazorla powered in a low shot to give the hosts a sixth-minute lead.

Arsenal could not make the most of their possession and were punished when poor defending let Andreas Weimann drive in a 22-yard equaliser.

But Nacho Monreal cut the ball across for Cazorla to sidefoot in a winner from 12 yards after 85 minutes.

The victory moved Arsenal to within a point of fourth-placed rivals Tottenham and, even though it was not a convincing win, it will come as a huge relief after home defeats by Blackburn and Bayern Munich in the past seven days.

Villa will be heartbroken after a game in which they defended so resolutely after letting in the opener and were rewarded for their counter-attacking efforts when Weimann scored.

However, they could not hang on for a point as Arsenal applied some late pressure and the West Midlands side dropped into the bottom three on goal difference.

Villa next play champions Manchester City before relegation rivals Reading and QPR, while the Gunners, who will hope to improve on a laboured performance, are scheduled to play fellow top-four contenders Spurs and Everton.

Gunners midfielder Jack Wilshere had highlighted that his side have a tendency to be slow starters in matches and he made sure that was not the case this time around.

"Goodness me this was not a convincing performance from Arsenal and it nearly wasn't a victory. Arsenal had so much of the play but Aston Villa, who were so bright on the counter-attack, will consider themselves unfortunate to lose. The end of an extraordinary week at the Emirates."

The England international was central to his side's play, surging clear from the left side in the opening minutes and having a driven shot fended away by keeper Brad Guzan.

Arsenal, though, did not have to wait long for the breakthrough as they took advantage of some hesitant and uncertain defending from a Villa side without injured centre-back Ron Vlaar.

Wilshere slipped the ball to Cazorla and, after his first shot was blocked by Nathan Baker, the Spaniard was quickest to latch on to the rebound before firing past Guzan.

The visitors responded with a tenacity to test the home side's resolve and give their hosts plenty of anxious moments.

Gabriel Agbonlahor had a shot parried away by keeper Wojciech Szczesny before the Villa forward narrowly failed to get on the end of a low Charles N'Zogbia cross across the Gunners goal.

A mistake from Monreal let the lively Weimann surge clear and the Austrian cut the ball back for N'Zogbia, whose first-time shot was well saved.

Arsenal briefly quelled Villa's threat and went close to a second when some neat passing ended with Olivier Giroud's low angled left-foot shot being saved by Guzan just before half-time.

Villa centre-back Ciaran Clark gave the home side a scare when he met an Ashley Westwood corner just after the break only to put his effort disappointingly over.

Giroud horribly sliced a shot wide at the other end and Arsenal's failure to add to their lead kept the visitors in with a shout of stealing an equaliser, which Villa duly did.

A Villa clearance was poorly headed by Gunners defender Carl Jenkinson on the halfway line and N'Zogbia nodded the ball to Weimann, who raced unchallenged at the home goal before scoring with a low strike.

Wenger's frustrations on the touchline were all too clear but his mood improved when a forward foray from Monreal let Cazorla tuck in his 11th goal of the season and help Arsenal avoid three successive home defeats for the first time since 2002.

Arsenal manager Arsene Wenger: "What is most difficult is not the critics, it is that we lost the last two games. I am not here to lose games, I want win. What hurts me the most is that we lost to Blackburn at home and Bayern at home.

"When people come to the Emirates Stadium, they are not to go away with wins. All the rest concerns me less. Of course [it has been difficult], but you do your job and focus on the next game and try to win it.

"That is what we did. I am not 30 years in this job at the top level and going to be destroyed by people saying I don't know what I'm doing. I have been in this job a long time and what is important is that we have responsibilities and we have to stand up for them and get the team ready to go into the next game ready to fight."

Aston Villa boss Paul Lambert: "I don't need to rebuild the confidence after that. But I haven't for a number of weeks now. The confidence is there.

"The team were excellent against Arsenal. I don't think we deserved to get beat. We looked a threat throughout the whole game. In the first half we should have scored. But the way the lads played, I couldn't fault them.

"But we came out in the second half and went again - and got the equaliser. The equaliser was a brilliant finish, from a fantastic counter-attack.

"We certainly didn't deserve to lose the game."