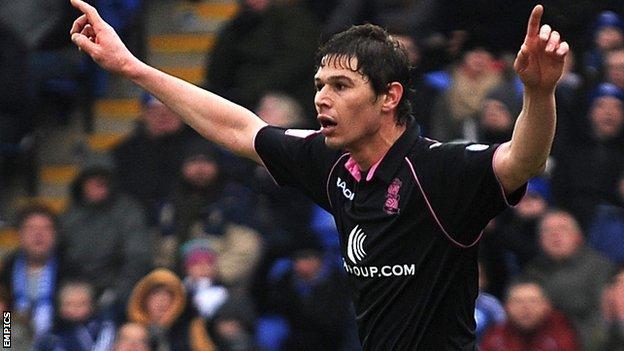 Birmingham helped their Championship survival hopes with a win at relegation rivals Peterborough.

Posh thought they should have had a penalty before Chris Burke's deflected 20-yard strike sealed Birmingham's win.

The win moved the visitors seven points clear of relegation, while bottom-of-the-table Peterborough were left four points from safety.

The home side had lost midfielder George Boyd, who joined Hull on loan after helping Posh to a 5-1 win over Millwall in midweek, but they began brightly.

They would have taken the lead but Butland saved impressively from Rowe before tipping Tomlin's follow-up effort over.

Instead, Zigic put Birmingham in front and Callum Reilly almost added to the lead when his 25-yard strike hit the crossbar.

Peterborough had a penalty appeal waved away, including when Nathaniel Mendez-Laing was sent crashing by City full-back Mitch Hancox.

Reilly also escaped a second yellow card after a challenge on Kane Ferdinand before a huge deflection from Burke's shot after 80 minutes beat Olejnik to put the visitors out of reach.

Peterborough manager Darren Ferguson: "If you're asking me whether or not the officials are good enough, the answer is nowhere near at this level.

"There were two big decisions in the game and the referee got both of them wrong as far as I am concerned.

"I see absolutely no reason why a forward would choose to go down when clean through and Nathaniel is adamant the Birmingham lad caught him.

"The assistant referee was 10 yards behind play so in no position to give a penalty while the referee clearly chose not to give one.

"I asked the referee why he didn't give the Birmingham lad a second yellow card and he said his foul was an accident, but again that's not how I saw it."

Birmingham boss Lee Clark: "You have to be delighted to win 2-0 on the road and that's certainly how I feel right now.

"A second successive clean sheet was particularly pleasing as solid defending is always the basis for success in football.

"We came here with a game plan and executed it very well. We had some outstanding performers, not least Chris Burke who has been back to his fine form of last season in recent games."