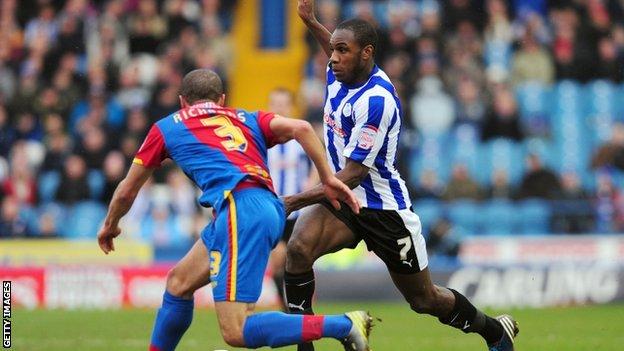 The hosts dominated the first half without joy, while Palace were on top for most of the second.

It was the Owls, though, who took the points, Lita heading home Michail Antonio's cross for his third goal since a January loan move from Swansea.

In a second half in which the visitors looked the likelier scorers, the Owls had relied on Chris Kirkland to keep them level, saving from Stephen Dobbie's half-volley.

But Ian Holloway's Eagles have now failed to win in their last 10 away games and Palace created little once Lita rose above the visiting defenders to convert Antonio's cross off the underside of the bar in the 81st minute.

Wednesday, who are five points clear of trouble at the bottom, should have taken the lead much earlier, with David Prutton's 25-yard half-volley going inches over the crossbar.

Lita had also missed a first-half chance to head his side into the lead while Kieran Lee's volley was blocked on the line and the Owls had to wait until Lita's late intervention to seal the win.

Sheffield Wednesday manager Dave Jones: "It was a hard-earned win from a dogged performance.

"I thought we were solid, we protected Chris Kirkland really well and we deserved the win in the end.

"I was really pleased with the goal, it was a fantastic ball in from Antonio and you know what you get from Leroy, it's what he's all about. He was hardly in the game for long spells but when he gets the chance he usually puts the ball in."

Crystal Palace boss Ian Holloway: "We struggled to get our game going and they seemed to have a bit more belief about them than us.

"The second half was better and we looked the team more likely to grab a goal but it just wasn't to be.

"I don't think we deserved to lose, but did I think we did enough to win it? Probably not. I felt a draw would have been a fair result."