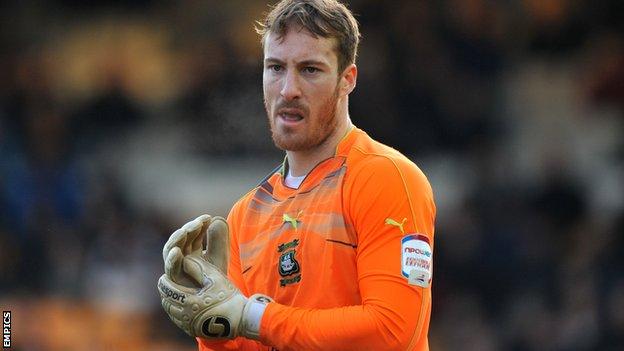 Plymouth goalkeeper Jake Cole condemned his side to defeat with a second-half blunder as Northampton stayed in the thick of the promotion picture.

It spoiled an otherwise competent display which saw him save from Roy O'Donovan, Harding and Bayo Akinfenwa.

Former Northampton defender Anthony Charles had a late chance to snatch a point but headed wide from a corner.

"We were made to scrap for it. We didn't play very well today, but it's about winning.

"Only Lee Collins and Roy O'Donovan played up to their normal levels and the rest were a tad below par, but that's how it is sometimes.

"There was a bit of fortune with the goal, but we didn't get very much fortune at AFC Wimbledon, so it's evened itself out.

"Everyone has their favourites on team selection, but it's me who picks the team. At times today, we looked good, but we know we can play better."

"It was a ridiculous goal. I'll go in and see the referee and I'll ask him the question 'Who scored the goal?'.

"It was a clear foul on the keeper and it's only the ref that doesn't see it.

"But he's probably never played football so he won't have seen what the foul was. Get ex-players in officiating who know the game.

"We're in a scrap but we have to be realistic. We have to look at how we're going to create more chances and score goals to win games."