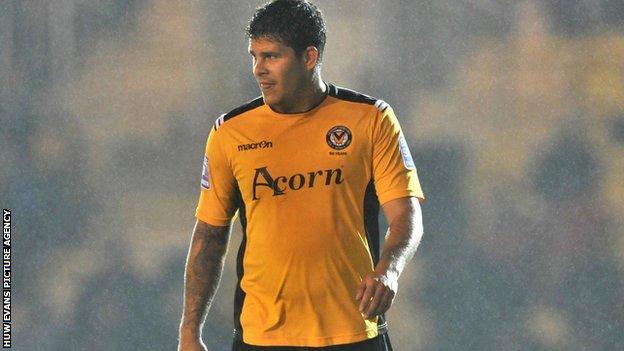 Newport County moved up to third in the Blue Square Bet Premier after victory over bottom side Telford United.

Christian Jolley headed home to give County the lead shortly after the break, before Jordan Rose narrowly missed the target for the visitors.

Victory was the high-flying Exiles' 18th league win of the season.

Telford are still bottom of the table after their 15th league defeat of this campaign.

Striker Rhys Griffiths made his County debut from the bench in the 80th minute after he joined the club following his release by Plymouth Argyle.

Before his spell at the League Two strugglers, he scored 181 Welsh Premier League goals in 180 League games for Llanelli.

"I thought we were very efficient on a difficult surface. I thought we controlled the game from start to finish.

"Obviously I'm disappointed to concede the late goal again for the second week running but overall I was pleased with the team's performance."

"We gave two criminal goals away again today - and we need to rectify the problem. We got a goal back towards the end and that made the scoreline respectable.

"At half-time, we were still in the game and it was only a few mistakes that cost us deeply in the end - our players weren't good enough. We need to be better all-round defensively.

"We must have a go for the 11 games left this season. We have to sign a few new players and the chairman is working to make this happen for us."