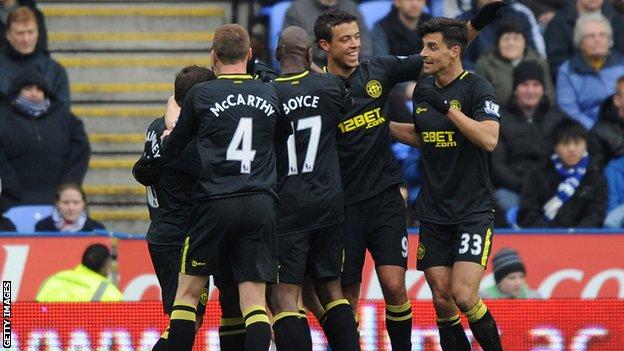 Two goals by Arouna Kone lifted Wigan Athletic out of the bottom three and increased 10-man Reading's relegation fears at the Madejski Stadium.

The Ivory Coast striker opened the scoring when Maynor Figueroa's header hit his chest and flew into the net.

Figueroa completed the scoring, before falling victim to a dreadful Pavel Pogrebnyak challenge, who was sent off.

Pogrebnyak could have broken Figueroa's ankle and the Russian's dismissal added to manager Brian McDermott's problems.

McDermott knows his side must improve quickly if they are to stay up, particularly as his team's remaining 11 games include trips to Everton, Manchester United and Arsenal. They also have to host Liverpool and Manchester City.

Wigan arrived at the Madejski Stadium with a solitary win in their previous 13 league outings and 51 goals conceded in 26 top-flight outings.

No other team had conceded more in the Premier League yet it was Reading's back line who played like novices.

Wigan climb out of the bottom three after a dominant display ended Reading's impressive recent home form. Royals boss Brian McDermott will want to erase this quickly - particularly as his side have some tough looking games on the horizon

It would have been much worse for the Royals but for goalkeeper Adam Federici, the Australian diving full stretch to deny Franco Di Santo following a powerful early run by the Argentina striker.

Reading were a shadow of the side that had recently overcame West Ham,West Brom and Sunderland at home.

But that was as good as it got for McDermott's lacklustre side.

Kone knew little about his first goal; Figueroa's header hitting the former Seville forward on the chest before flying into the net.

Yet, if the 29-year-old's opener was scruffy, his second proved his quality.

Jean Beausejour's delightful pass split the home defence and allowed Kone, who has recently returned from the Africa Cup of Nations, to clip the ball over the advancing keeper into the net.

Wigan's loyal away following were ecstatic yet it got even better after the break.

Figueroa had not scored a top-flight goal for almost two years but the Honduras left-back was celebrating after firing through Federici's legs following a clever one-two with Di Santo.

Pogrebnyak was then shown a straight red card for an ugly challenge on Figueroa, leaving Reading to see out the remaining 36 minutes with 10 men.

Having struggled all season, Wigan will be confident they can build on the momentum of this win to secure a ninth successive season in the Premier League.

"I'm going to move on quickly from that game. It's the only thing you can do in a situation like that.

"The first 43 minutes there wasn't too much in the game. They got a real spring in their step once they scored.

"But we didn't do the right things at the right time. We didn't get the details right."

"The first goal came from a set-piece but the two after are as good as you are going to see.

"If we had done that previously in the season we would be in a much better position.

"The quality of our attacking play was a real difference."