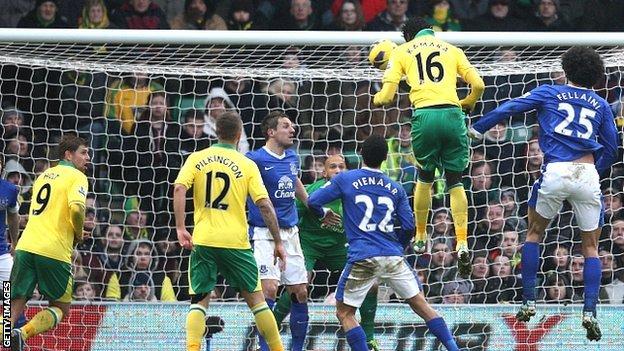 Canaries substitute Kei Kamara's towering late header seemed to have rescued a point for the Canaries.

But Holt grabbed an unlikely winner when he stabbed the ball in from close range four minutes into added time.

A first for Sierra Leone

Kei Kamara is the first player from Sierra Leone to score in England's top flight and his goal means that players from 88 different nations have now scored in the Premier League.

Everton had deservedly led through Leon Osman's close-range header before their capitulation in a remarkable finale.

The result is a huge blow to the Toffees and their hopes of securing a Champions League qualification place.

But they seemed certain to keep the pressure on the top four and stay within two points of fifth-placed Arsenal as they dominated the early stages of the second period, retaining possession with ease and frustrating their hosts.

There was certainly no sign of the late drama to come as Everton eased into a half-time lead.

Osman grabbed the goal when he headed home a teasing Leighton Baines cross six minutes before the break after a fine move on the left flank which also involved Steven Pienaar and Marouane Fellaini.

Nikica Jelavic had earlier been denied by Mark Bunn when the goalkeeper blocked well with his feet after a smart turn and piece of control in the six-yard box, and Bunn also kept out a deflected cross from fit-again right-back Seamus Coleman.

And, although the visitors did not create many clear-cut chances, they always posed the greater threat.

A Holt shot that was well saved by Tim Howard when the scores were level was as good as it got for Norwich before the interval.

Kamara headed narrowly wide from an inviting right-wing centre and that rare chance seemed to lift the home crowd and bring much-needed belief.

Nigel AdderleyMatch of the Day commentator

That could be a moment to transform Norwich City's season. It has been such a grim mid-winter all around Carrow Road and Chris Hughton must be ever so relieved. It was captain Grant Holt who grabbed the winner but it was Kei Kamara who inspired the fightback.

With the pressure mounting, Kamara headed Norwich level with his first Premier League goal when he powered home a Robert Snodgrass corner.

And, much to Everton manager David Moyes' disgust, Holt reacted quickest to bundle home the winner from close range after the scheduled three minutes of added time has passed.

Norwich manager Chris Hughton: "Once you are 1-0 down and you get back to 1-1, you have to be honest and say you settle for that. But the lads wanted something different and showed great drive and determination to get the winner.

"We are past the 30-point mark now, so for us and the team, that is a big confidence booster.

"Kamara is a very good character, very down to earth and is really delighted at the prospect of being at Norwich and in the Premier League.

"We will have to see how he develops, but this is not a particularly tough group to integrate into and he has fitted in very nicely."

Everton boss David Moyes: "We had controlled the game, but were wasteful in the second half when we had chances to get another goal, and we were always going to be put under pressure at the end.

"I cannot understand why he plays three minutes and 20 seconds for the stoppage time, but he has got that discretion, although I disagree with it.

"We passed it well enough and tried to do the right things, but we were not good enough in the final third - but one thing is for sure, we did not deserve to lose.

"There is still chances for us to do it (get into the top four), but we are going to have to be very good to do it. However, we should have seen this one out, if we have any real ambitions, then we have to make sure we do not lose that game."