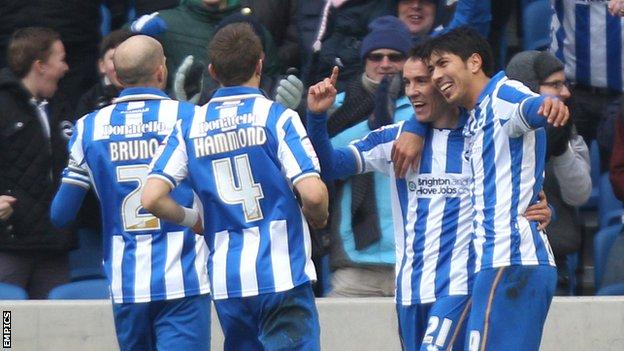 David Lopez's fifth goal of the season proved enough to sink Burnley and help Brighton climb into the top six of the Championship table.

The Spaniard struck from 12 yards after connecting with Andrea Orlandi's cross as Gus Poyet's side secured a third win in four league games.

Burnley battled and would have come away with at least a point but for heroics from keeper Tomasz Kuszczak.

The Pole saved well from Junior Stanislas and Jason Shackell.

Kuszczak also denied Kieran Trippier towards the end yet the Clarets are now without a win in five league games.

Having weathered early pressure from the visitors, Brighton settled and took the lead in the 20th minute when Orlandi delivered a centre from the left for Lopez to strike home first time.

Stanislas's shot from distance had to be met with a desperate block by full-back Bruno before Shackell's header from Keith Treacy's 34th-minute corner was parried by Kuszczak.

Brighton spurned chances to increase their lead after half-time, with both Jose Ulloa and Lopez left frustrated.

At the other end, Chris McCann should have done better when presented with an opportunity from six yards out before Kuszczak produced another fine save to keep out Trippier.

And there was still time for Charlie Austin to miss out on his 25th goal of the campaign, the Clarets forward missing the target with a header.

"We are back in the top six and that is where we want to be.

"David Lopez scored with a great finish and then our goalkeeper Tomasz Kuszczak made a great save. That`s the kind of quality that helps you win games.

"I like what I'm seeing. We now have a different character to the squad and keeping clean sheets is a good sign."

"We deserved something, absolutely. There is a real positive feel now because we need performances like that.

"You win games with displays like that and to come here and perform like that was very pleasing.

"There were so many good things, like the way we dominated the ball and created chances. It`s a positive sign for us."