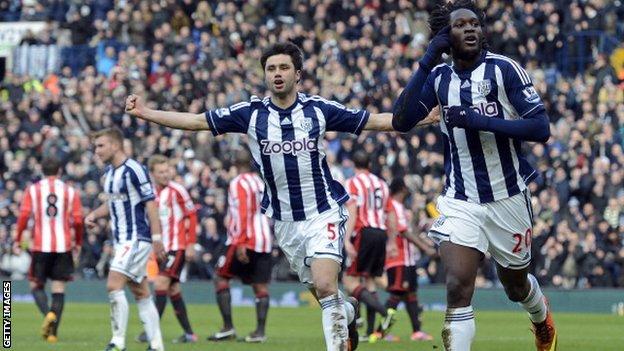 Romelu Lukaku scored twice for West Brom as the Baggies beat Sunderland to keep their hopes of claiming a Europa League place alive.

Lukaku's penalty, after a Craig Gardner handball, put the hosts ahead.

The Belgium striker doubled his side's lead when Sunderland goalkeeper Simon Mignolet's clearance rebounded off him.

The Baggies' best Premier League finish is the 10th spot they achieved last season. They have not played in Europe since their Uefa Cup campaign in 1981-82.

Stephane Sessegnon curled home a late consolation, but Albion held on for a deserved win.

All the talk pre-match was about West Brom's Peter Odemwingie, who had not played since trying to force a move to QPR on transfer deadline day, and he was booed as he came on as a late substitute.

But it was the performance of the outstanding Lukaku that stole the show as the 19-year-old was at the heart of everything good Albion did.

Lukaku's efforts, along with intelligent play from strike partner Shane Long, helped take the Baggies up to seventh as they aim to play in a major European competition for the first time in 31 years.

Sunderland played their part in an exciting game and they should have stolen a point in injury-time when James McClean fired over.

Baggies manager Steve Clarke had insisted reaching the 40-point mark was his side's first target, which they have now done with 11 games remaining.

But it was Sunderland who should have taken the lead when Steven Fletcher's low shot hit the foot of the post before the Scotland striker wasted a second chance by shooting over the bar.

The hosts deservedly went ahead in the 35th minute when Lukaku, making only his 12th Premier League start of the season, slotted home a penalty after Liam Ridgewell's cross had been handled in the area by Gardner.

It was his 11th goal of the season, although that should have come a minute earlier when he had a goal harshly cancelled out.

Referee Roger East pulled the ball back for a free-kick after Chris Brunt was fouled while sliding a clever pass through to Lukaku, who finished well past Mignolet.

Lukaku, on loan from Chelsea, was unlucky not to score more goals, twice seeing powerful efforts parried by a busy Mignolet.

But Albion were living dangerously by failing to double their lead and could have conceded when Sessegnon's weak prod at goal lacked power and was hacked off the line after goalkeeper Ben Foster had flapped at a cross.

They did get their second when a horrible backpass from Titus Bramble was well short and Mignolet, having to run from his penalty area, cleared the ball off Lukaku and into his own net.

Sessegnon curled a late goal back for Sunderland but it was not enough and the defeat, which means Sunderland have only won two of nine matches in 2013, leaves the Black Cats only five points clear of the relegation zone.

West Brom manager Steve Clarke: "I was a little bit nervous. We have to learn to manage the game a little better and see it out better than that. It didn't have to become a game of basketball, which it did in the last 15 minutes.

"It's nice to get back-to-back wins and give the supporters a nice Saturday evening."

Sunderland manager Martin O'Neill: "Really disappointing to lose the game considering we had so many chances. That's the last three matches we've played where we shouldn't have been beaten.

"The big decision was the penalty kick which was given against us. But then there was a similar situation at the other end where it wasn't given. I've seen both of them back. Both are penalties.

"We played very well indeed and got nothing out of the game."