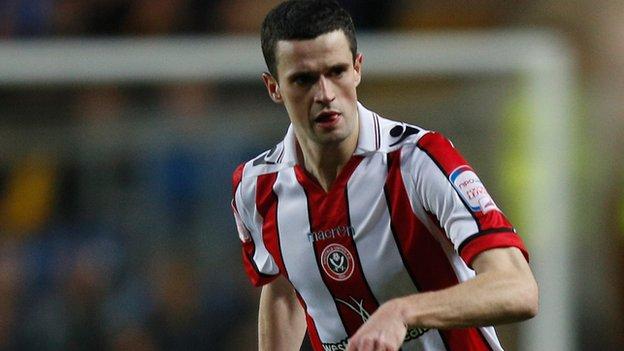 Jamie Murphy's first-half goal sent Sheffield United to the top of League One as Bournemouth slipped to sixth.

Murphy struck from close range after his initial effort hit the post as manager Eddie Howe suffered a first home league defeat since his return.

Barry Robson hit the bar for the Blades while Harry Arter saw his shot cleared off the line for Bournemouth.

The result gave the Blades a one-point lead at the top over Swindon, Tranmere and Doncaster, who are only separated by goal difference, with both Yeovil and Bournemouth a point further back.

"We huffed and we puffed and we kept the ball really well but we never hurt them enough and never asked enough questions.

"Our match winners didn't perform and I think we need our flair players to dig us out of a hole sometimes and there was nothing in the game in terms of chances for them.

"We knew we were in a really difficult spell of games. We are always disappointed to lose and that's consecutive defeats which will hurt everybody badly but we really need to bounce back on Tuesday."

"Our team's performance was excellent. We had to have the physicality today, we had to defend properly.

"But what pleased me more than anything was how we thought out our game-plan, there was some intelligent pressing all the way through.

"They didn't get through us virtually all afternoon. to come here and have that type of performance was terrific.

"Yes, we had to defend and yes, they had some possession, but it was all around the half-way line."