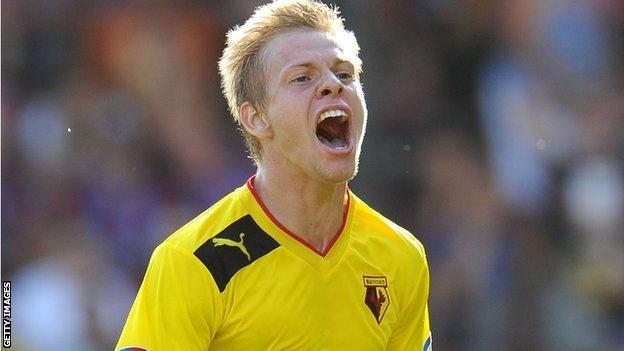 Watford moved up to second in the Championship as striker Matej Vydra scored his 20th goal of the season.

The 20-year-old Czech, on loan from Udinese, beat Derby keeper Adam Legzdins with a drive from the edge of the area 10 minutes before half-time.

Joel Ekstrand doubled the Hornets' lead from 10 yards before Jamie Ward reduced the deficit from the penalty spot after he was pushed over by Lloyd Doyley.

The Rams pressed for an equaliser but Watford held on to move above Hull.

Watford boast the best record in the Championship in 2013, with seven wins, one draw, two defeats and 22 points from 10 games

It might have been a nervy final period for Watford and, in particular, substitute goalkeeper Jonathan Bond, who came on towards the end of the first half when Manuel Almunia went off injured.

But Gianfranco Zola's side, who have now won four of their last five, were never really in trouble after a lively start.

Vydra was thwarted by Legzdins when through on goal and Alexandre Geijo volleyed the rebound over.

Derby had chances of their own, Ward shooting over the bar and Conor Sammon heading wide.

It was threatening to be a frustrating afternoon for both sides in front of goal but promotion-chasing Watford took the lead when Vydra continued his prolific form with a superb strike.

Almen Abdi went close for Watford but was denied by Legzdins at the keeper's near post before Abdi sent over an in-swinging corner for Ekstrand to finish calmly with just over 20 minutes remaining.

And despite Doyley's indiscretion and Ward's assured finish from the spot with 17 minutes left, the home side defended solidly to ensure a seventh win in nine league games.

Watford manager Gianfranco Zola: "Obviously if you ask my opinion about the penalty, I'm not very happy about it. I thought it was a soft one. If that was a penalty, how many penalties do you have to give in the box?

"We came out with three points that are very, very important, especially because we were playing against a good team and it was the third game in a week."

Derby manager Nigel Clough: "We're quite pleased with the performance generally. We had numerous situations today and it's been a failing of ours - we don't make the most of them in the final third.

"There was nothing in the game generally between the two teams. They were two passing sides. I didn't think there was a great deal in it, just that little bit of quality and us failing to defend the set play. Very simple things win or lose football matches most of the times - basics."