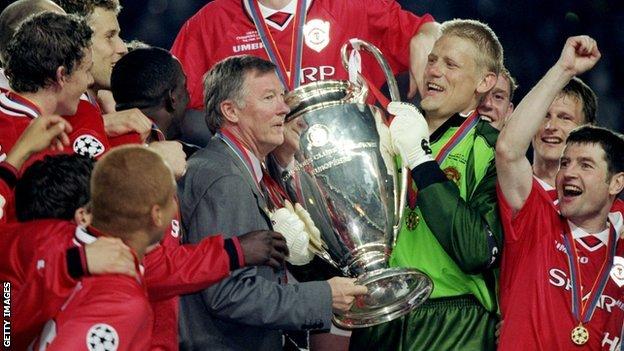 Once again Ferguson's team are chasing a trio of titles in the Premier League, Champions League and FA Cup.

The Scot said of his team's chances: "We have a stronger squad now."

"It's not easy to rotate but it has to be done. The biggest responsibility lies with me to pick the right team. We have a lot of important games."

Ferguson's strategy of rotating players was key to United's success in 1999, when their domestic achievements were capped by an injury-time win over Bayern Munich in the European Cup.

Reflecting on that campaign, Ferguson believes he has more options at his disposal than he did 14 years ago.

"When we went to the [Champions League] final, [Roy] Keane and [Paul] Scholes were suspended but Henning Berg was the only injury," Ferguson added.

"I still had to pull in a player [Jonathan Greening] who had only played once or twice in the first-team.

"He got a medal for being on the bench. That gives you an idea of the strength of the squad.

"It is nice to look back on these things and think how it was done at that particular time.

"But the reality is that we should not get carried away, particularly in the FA Cup when anything can happen. You don't want to be a shock."

Ferguson used the depth of his current squad during last week's Champions League first-leg 1-1 draw with Real Madrid, opting to leave captain Nemanja Vidic out of his defensive line-up.

Vidic could return for Monday's fifth-round FA Cup tie at home to Reading, but Ferguson is split between focusing on that match and looking to what lies ahead.

"After Monday we have a league game against QPR, then Norwich, before Madrid again," Ferguson added. "Then we'll use the full squad.

"In many people's eyes Monday would be, 'Yes, it's Reading, we have just been to Madrid, it was a great night, Monday will take care of itself.'