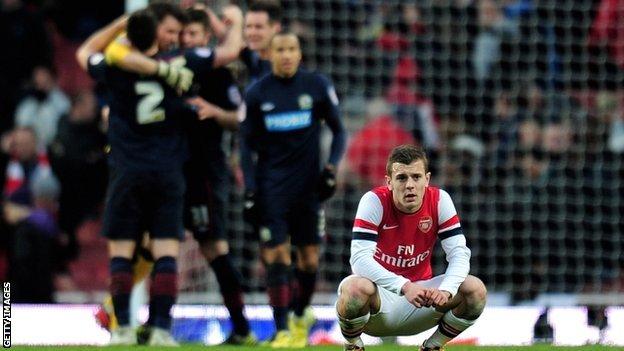 The Gunners have not won silverware since the 2005 FA Cup and only have the Champions League left this season as they face Bayern Munich on Tuesday.

Wenger said: "It is very painful to lose a game like that. What is important is to focus on the next one.

Arsenal have lost an FA Cup home game for the first time since February 1997, ending a run of 34 games on home soil without a loss in this competition (via Opta)

"The season is not over. For you maybe, not for me."

Wenger, 63, added: "If we feel sorry for ourselves we would be completely wrong. We have a massive game on Tuesday night and we have to show that we have some response in the team."

Arsenal, who are fifth in the Premier League, dominated the game at the Emirates with Jack Wilshere, Theo Walcott and Santi Cazorla starting on the bench and introduced after 70 minutes.

The Gunners lost to League Two Bradford in the Capital One Cup in December.

German side Bayern Munich are 18 points clear at the top of the Bundesliga and are looking to take the next step towards a fifth European Cup triumph when they visit the Emirates next week for the first leg of their last 16 tie.

But Wenger said he was not worried by the eight-season trophy drought at the club.

"We have just lost a game today and we don't need to think too much about the eight seasons," he told BBC Radio 5 live. "The players who played today didn't play eight seasons ago and we must focus on the next game."

Reflecting on the defeat by Michael Appleton's Blackburn, the Frenchman said: "I couldn't see how we could lose the game because we had a lot of the ball and they had one shot on goal.

"But they defended well and it's the kind of game you can lose if you can mistake at the back like we did."

On booing at the end of the game, Wenger added: "What do you expect, people to applaud when you lose a game like that? It's absolutely normal."