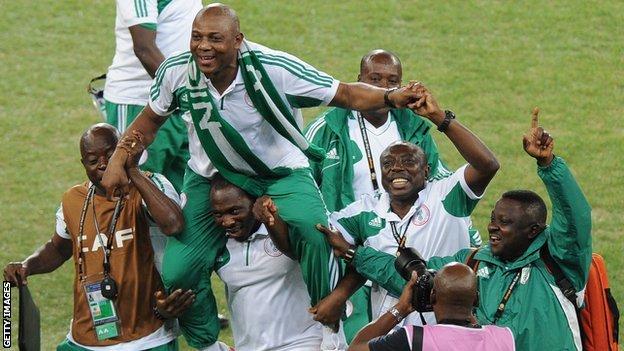 Nigeria coach Stephen Keshi says the newly-crowned African champions must ensure that they qualify for the World Cup in Brazil next year.

Keshi, only the second man to lift the Africa Cup of Nations title as a player and coach, is also the first black coach to win the trophy since 1992.

The 51-year-old has already targeted the Confederations Cup in Brazil in June.

Now uppermost in Keshi's mind is to qualify for the 2014 World Cup.

I trust these boys won't let the nation down

"When you've conquered the African continent, then you have to prove it was not a fluke by qualifying for the World Cup regularly.

"Yes, we want to travel to the Confederations Cup and compete well as continental champions, but we must not forget the biggest one next year.

"Our fans will totally forget about this celebration when the World Cup qualifiers start in March, so we must not over-celebrate."

Keshi was under huge pressure to win the tournament in South Africa, almost two decades after he captained the country to their last Nations Cup triumph.

The Nigerian media had been scathing of his decision to leave established players like Peter Odemwingie, Obinna Nsofor and Obafemi Martins out of the squad in favour of younger, inexperienced players like match-winner Sunday Mba, who plays in the country's domestic league.

"I was openly criticised but that's football and now we must continue with our rebuilding exercise," Keshi said.

"When you have faith in your players, they will never let you down. I don't care if you are a local boy or a big player in Europe, we are all equal and one."

Looking ahead, Keshi is under no illusions that there is still much work to do - starting with a 2014 World Cup qualifier at home to Kenya in March.

The Super Eagles currently top Group F, ahead of Namibia, Malawi and bottom of the table Kenya, while the African champions have four points from their opening two games.

"Some players will get a chance to come and fight for a place in this team. Of course they are well aware of the strong competition now.

"Importantly, we must qualify to play in Brazil next year. We need the support of everyone to make that happen. I trust these boys won't let the nation down."

Keshi was the captain when Nigeria first appeared at the 1994 World Cup finals in the US.

Since that maiden appearance, the Super Eagles have failed to qualify only once for the global showpiece, in 2006.