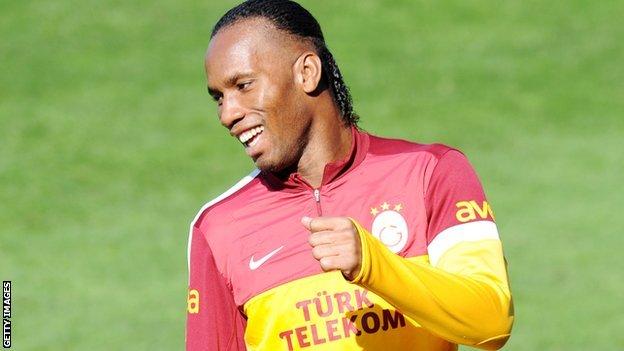 Ivory Coast striker Didier Drogba came off the bench to score on his Galatasaray debut, as the Turkish side defeated Akhisar 2-1 on Friday.

The former Chelsea star came on in the 63rd minute and headed his team's opening goal just five minutes later.

Drogba signed an 18-month contract with the Istanbul club at the end of January, moving from Shanghai Shenhua.

The Chinese side - with whom he signed a two-and-a-half year deal last June - opposed the move.

Buruk Yilmaz added to Drogba's opener to make it 2-0, with Sertan Vardar hitting a consolation goal five minutes from time for bottom of the table side.

They are due to play German side Schalke 04 next Wednesday in the last 16 of the European Champions League.

He was a member of the Ivory Coast team which lost to eventual champions Nigeria in the quarter-finals of the Africa Cup of Nations.