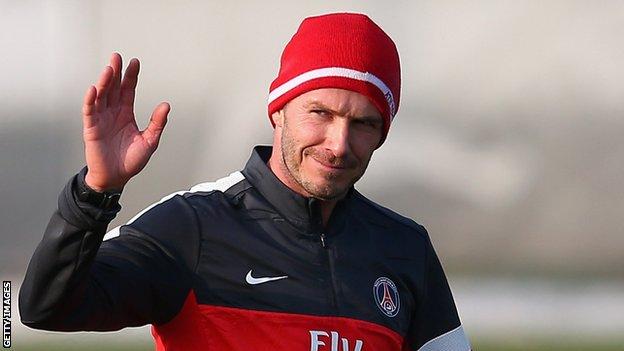 David Beckham will make his debut for Paris St-Germain in next weekend's clash with rivals Marseille, manager Carlo Ancelotti has revealed.

Sunday's trip to Sochaux comes too soon for the midfielder after he only began training with his team-mates this week.

"He'll be staying here to work, he needs more training, he'll be ready next week. Not necessarily to start, but to play." Ancelotti said.

The ex-England captain has joined with star names such as striker Zlatan Ibrahimovic, defender Thiago Silva and winger Lucas at the ambitious Qatari-backed side.

Beckham - who counts Manchester United, Real Madrid and AC Milan among his former clubs - has not played a competitive match since helping Los Angeles Galaxy lift the Major League Soccer Cup in December.

Ancelotti added: "He can bring his experience, his quality, his professionalism - these are things that we need."

Beckham travelled to Spain on Tuesday to watch PSG beat Valencia 2-1 in their Champions League second round, first-leg fixture, but had previously been working on his fitness alone.