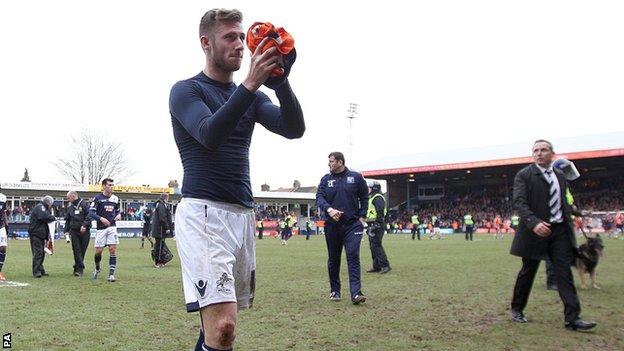 The Lions won 3-0 at non-league Luton Town to progress from the fifth round.

"Like everybody we'll be dreaming. If we can get one of the big boys back at the Den that would be great," he said.

"It's something we've lacked in my time at Millwall, we haven't had the fortune of the draw. We hope we get it and look forward to it because we're one game away from Wembley."

Before losing to Millwall, Luton had become the first non-league team to knock a top-flight side out of the FA Cup since 1989 when they beat Norwich 1-0 at Carrow Road

Millwall's last appearance in the last eight came in 2004, when they beat Tranmere in a replay and ended up reaching their only ever FA Cup final, losing 3-0 to Manchester United.

"If there's any sort of omens we'll hang on to anything we can. If we could progress it would be fantastic," said Jackett, who has been in charge at the Den since 2007.

Millwall host Peterborough on Tuesday night as they look to improve on a run of one win five league games and close a nine-point gap on the play-offs.

"It certainly helps when you win games of football and we go into Tuesday night's game off the back of a bad run in the Championship," said 51-year-old Jackett, who hopes to have defender Danny Shittu back from an ankle injury.

"We want to get back on track as quickly as possible."

Luton will also turn their attention to a promotion campaign after a remarkable run in the Cup, which included victories over Championship Wolves and Premier League Norwich City.

The Hatters, looking to end four years of exile from the Football League, need to make up six points to get back among the Blue Square Bet Premier play-off places.

"The players know they're playing for a very proud club and it's not always easy when we lose a game," said boss Paul Buckle.

"It was really nice to get Wolves here and go to Norwich. But we've got to dust ourselves down. There's a realism to it.

"We're a non-league team and I want the players to start playing like non-league players.

"What that means is when you're going away to place like Dartford and Barrow you have to roll your sleeves up and do the nasty side. If we do that we've got a chance."