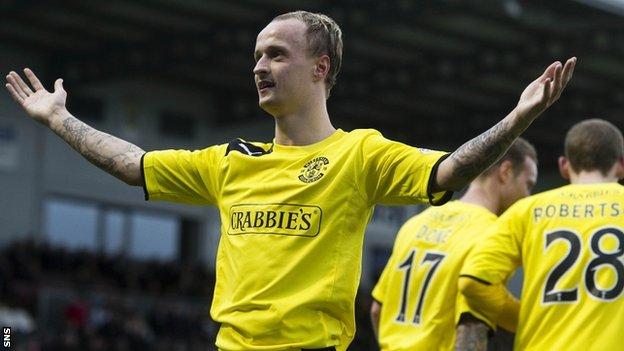 Griffiths' second-half penalty proved to be the difference between the sides at St Mirren Park.

And Fenlon was pleased with the all-round display of the forward, in an unfamiliar role as a lone striker.

"Leigh was very good for us in that lone role. He's a talented boy, and he just needs to keep producing on the pitch for us," he told BBC Scotland.

The lively Griffiths struck the post with a fierce first-half shot and tucked away the match-winning spot-kick on 72 minutes.

"I was delighted with the three points today as well as the performance," added Fenlon.

"We passed the ball really well and created a few chances. I thought defensively we were very good today.

"It's a big three points for us today."

Fenlon admitted he had changed tactics for the match after their defeat by St Johnstone on Monday, setting out a defensive formation to frustrate St Mirren, with only Griffiths in a forward position.

"We worked on that during the week," he said. "Trying to stop [Paul] McGowan getting on the ball so much - he is the playmaker for them.

"But we also gave the two wide players the licence to join Leigh.

"Our shape wasn't good on Monday night, but today I thought it was very, very good."

And the Irishman is keen to use the return to winning ways as a springboard to move up the league table.

"We're a good team, we've got to have confidence and belief in ourselves," he continued.

"We didn't play well last Monday - we let ourselves down - but today was a completely different side of us.

"You have to give the players great credit for bouncing back today.

"We've got to make sure that we kick on now."