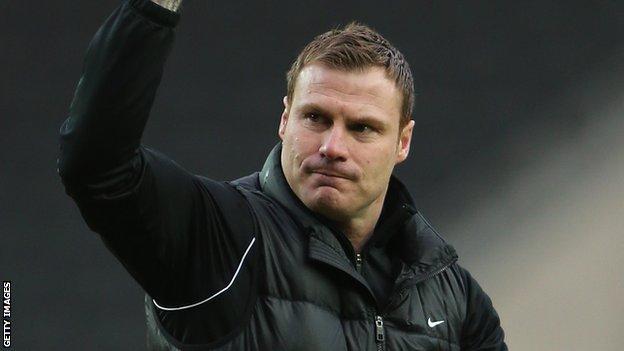 Barnsley boss David Flitcroft says his team's passage to the FA Cup quarter-finals has been inspired by Bradford City's run to the League Cup final.

The Tykes moved to within 90 minutes of a Wembley FA Cup semi-final thanks to a 3-1 win at MK Dons on Saturday.

Flitcroft said: "Bradford's cup run has been very inspirational to my group."

Barnsley last reached Wembley in 2008 when they were edged out 1-0 by Cardiff City in the FA Cup semi-final.

And Flitcroft, who only took permanent charge on 13 January, is keen to follow Yorkshire neighbours Bradford to the national stadium in April.

"I have been inspired by Bradford and I am trying to make new heroes at this club," added 39-year-old Flitcroft.

"We're in the last eight of a competition I absolutely love. This competition is about families to me and I'm trying to build a family here we can be proud about."

Barnsley are one point from safety in the Championship table ahead of Tuesday's home match with fellow strugglers Wolverhampton Wanderers.

"The players are sacrificing everything," he added. "We're going to stay in another hotel tonight because we've got a big game against Wolves on Tuesday.

"We spent a lot of time and dedication preparing for the MK Dons tie.

"We locked the players in a hotel for two days and took them to Doncaster on Tuesday to watch MK Dons play.

"I think teams have underestimated MK Dons in the past and that's something we didn't want to do. Our first half performance was a masterclass. In the second half we had to dig in but the players produced a wonderful result."

The win was marred by a head injury to former Manchester City player Kelvin Etuhu.

"He's gone to hospital for a check over but he will be OK," he added.