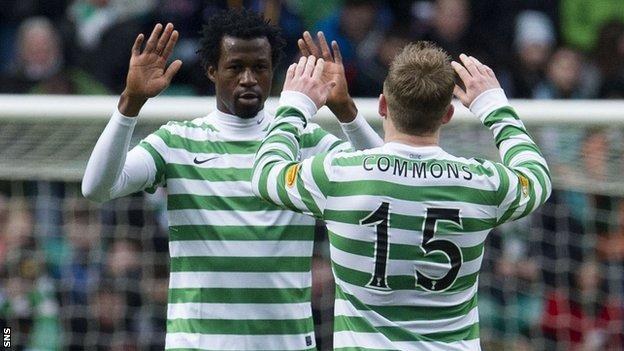 The Nigerian defender headed Celtic's leveller after Stuart Armstrong had given United a temporary lead.

And Ambrose's display came days after he was criticised for errors in the Champions League loss to Juventus.

"He just had a bad night [against Juventus]. He's a terrific player and he's a lot of suitors out there already but he wants to play here and you could see with his performance today that he wanted to rectify Tuesday night."

Victory against United moved Lennon's side 18 points clear at the top of the Scottish Premier League.

"I got a fantastic response," said Lennon. "We have come a long, long way in a short space of time and the players showed their quality.

"We showed great reaction from conceding a poor goal from our point of view and Efe went up and showed loads of character.

"I'm delighted, everyone played well. My goalie looked back to his best.

"We wanted to re-affirm our position as the best team in the country and I think we've done that."

Dundee United had the chance to level after Celtic went 2-1 up but Jon Daly missed from the spot after Adam Matthews had been penalised by referee Bobby Madden for a challenge on Gary Mackay-Steven.

And, in reference to Celtic's frustration at not being awarded penalties in the 3-0 defeat by Juventus on Tuesday, Lennon said in jest: "I wish Bobby had been refereeing on Tuesday night, we might have got a couple.

"It was never a penalty."