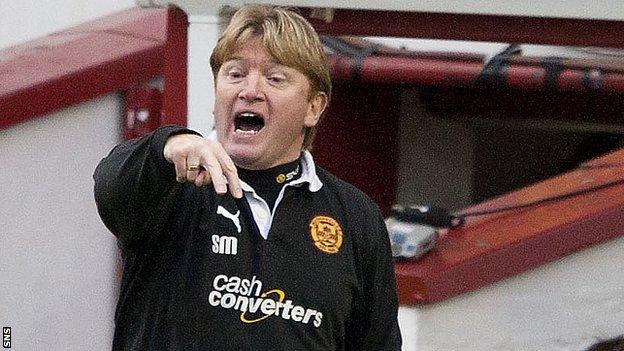 "I'd be surprised if next week it's not tied up; I can't see any problems," he told BBC ALBA during coverage of the 3-0 win over Inverness.

The Steelmen moved into second spot following Saturday's comfortable victory against Caley Thistle, with Michael Higdon grabbing two goals either side of a Nicky Law finish.

Higdon's opener was a tap-in, diverting a wayward shot from Henrik Ojamaa and he added an excellent volley in the second-half.

"The first was a little fortuitous as Henrik has gone for goal and screwed it off-target but Michael is there to put it in."

Motherwell have won all three of their matches against former manager Terry Butcher this season, scoring 12 goals.

"Inverness were good in the first half, they knocked it about well and it was an open game," added McCall.

"They are free-scoring this season and to keep a clean sheet and get three goals is really pleasing.

"Some of our football was exceptional at times and we merited the victory.

"I thought we had some big performances today. I thought Shaun Hutchinson was a tower of strength, Nicky Law in the middle of the park, ably assisted by Stuart Carswell, who covered acres of ground.

"We've got a big game here against Dundee United on Tuesday.

"The park is in decent nick for this time of year and we've averaged three goals in our last five home games.

"We're not only winning games; hopefully we are entertaining as well and that's what fans pay the money for.

"We want them to get right behind us and I'm sure they will."

Meanwhile, McCall played down anticipation that free agent James McFadden could re-sign for Motherwell after returning to the club to train.

The 29-year-old spent several weeks with his former club in the summer before moving to Sunderland after talks with Fir Park chief executive Leeann Dempster failed to come to fruition, but is again looking for a club.

McCall said: "We have had Marc Fitzpatrick in with us, we have had Jim O'Brien in with us, I think the young boy (Paul) Slane might be coming in on Monday to train with us. We are just an open house.

"There is nothing to speak about on my point of view at the moment."