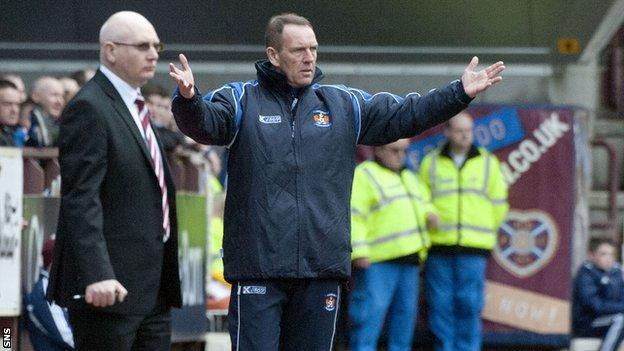 "He's gotten the chances and he's put them away and you have to give him credit because you look at what he is playing against," he said.

"There are three international defenders in there for Hearts.

"It was a good outcome and the boys have shown good character. To beat a club the magnitude of Hearts three times in one season is terrific."

Heffernan became the second Kilmarnock player to score a hat-trick at Tynecastle this season, matching the absent Cillian Sheridan's tally from earlier in the campaign.

The striker gave his side a half-time lead, before a six-minute second-half double settled the contest.

The win moves the Ayrshire side into fifth place after their third Scottish Premier League win in four outings, the other game being Wednesday's 1-1 draw at Inverness.

"What you get in February every year is pitches that are not as fluent," added Shiels.

"That means there is a reduction in the passing volume you can achieve in the game.

"I was pleased with the way we passed it. I think we counter-attacked well. The co-ordination of our movement was outstanding.

"It was a massive win for us.

"We know that if we want to get in that top six we need to be beating our nearest challengers.

"It's good to take points off them; that's encouraging."