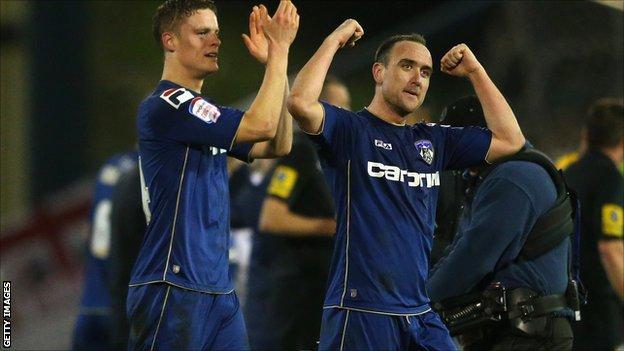 Matt Smith's late equaliser gave the League One strugglers a 2-2 draw to put them in the hat for the quarter-finals.

"Everyone near me was jumping around when Matt scored but I just started smiling to myself," Philliskirk said.

"These have been troubled times and I am under no illusions what a game at Goodison Park means to us financially."

Holding the Toffees, who are sixth in the Premier League, means the cash-strapped Latics extend a remarkable cup run that had already seen them shock Nottingham Forest and Liverpool to reach the last 16 for the first time since they were semi-finalists as a top-flight club in 1994.

But the unassuming Philliskirk, who is combining his caretaker managerial duties with his permanent role as head of youth at Boundary Park, refused to get carried away with their success.

Philliskirk had also taken charge of the Latics' youth team in a 1-1 draw with Rochdale in front of 30 people at Salford City's ground on Saturday morning, and says that result was as important to him as holding Premier League giants watched by a TV audience of millions.

"From the club's perspective, drawing with Everton is massive," he added. "For me personally, seeing the development of my young players earlier today meant just as much."

The 48-year-old former Sheffield United, Bolton and Latics striker has looked after first-team matters since Paul Dickov's departure on 3 February and admits he does not know if he will still be manager for the replay against the Toffees.

Oldham more than deserved their replay. Credit to them

"I can't answer that question," Philliskirk said. "I just said to the players 'enjoy tonight' but our game at Stevenage on Tuesday night is as important.

"If we can win there then we are out of the bottom four. But, from what I have seen with the spirit we have shown here and in our win against MK Dons last week, we are better than our league position suggests."

Everton boss David Moyes was left frustrated by his side's failure to see out victory - and by the manner of the late equaliser they conceded.

Oldham sent their keeper Dean Bouzanis up after forcing a series of corners in injury time and he appeared to impede Tim Howard.

Moyes said: "I thought it was always going to be nip and tuck with five or 10 minutes to go because we didn't get the third goal to kill it off.

"I thought from the first corner that came in there was a foul on our keeper but it wasn't given and Oldham more than deserved their replay. Credit to them.

"I know they hit the post but I didn't think they had many other opportunities apart from when they scored - but there was always that chance it could happen."