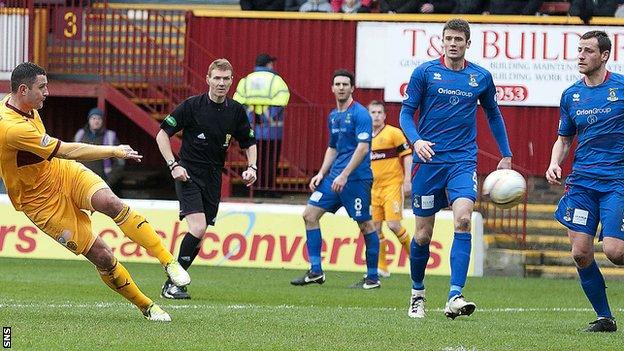 "We got what we deserved, which was nothing," he told BBC Scotland. "It wasn't good enough.

"They are an honest bunch of lads and I think the midweek game with Kilmarnock took a lot out of them.

"We didn't get it right at either end and that's not like us this season. There are not many times I could say we were second best but we were today."

Inverness are without a win in six matches and failed to bounce back from the 1-1 draw with Kilmarnock, when they lost a last-minute equaliser after dominating.

"They showed more hunger and appetite for the game and got the goal at the crucial time.

"I thought we started the game very well.

"You could see our lads were a little bit leggy after the midweek game, they put a hell of a lot into the Kilmarnock game and there was a lot of heartache when we didn't win the game.

"We kept the same team because they played so well

"There have not been many times we have come up second best against a team and unfortunately it has always been Motherwell.

"The pivotal moment was the first goal, we defended like amateurs. It gave them a lift and knocked us back.

"Motherwell were very cute and organised and although we had a lot of possession we couldn't really create anything when we were chasing the game."