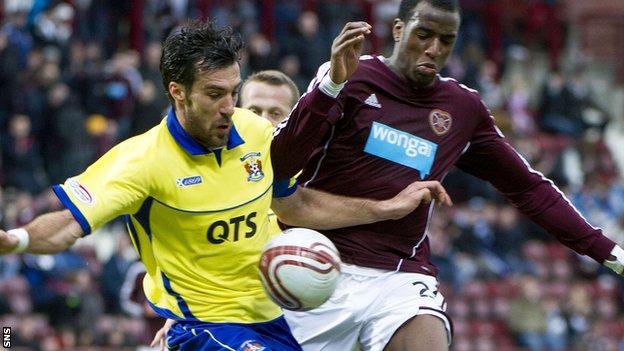 Manager John McGlynn lamented poor defending for the reason his Hearts side lost 3-0 at home to Kilmarnock.

Having lost skipper Marius Zaliukas for the rest of the season, the Hearts defence was further depleted when Darren Barr was stretchered off.

But McGlynn was not looking for excuses as his team were undone by a Paul Heffernan hat-trick.

"In both boxes we weren't committed enough," he said. "They've taken their chances and we haven't taken ours."

It was the Ayrshire side's third win from three games against the Edinburgh club in the league this season.

"It's a sore one for us to take," added McGlynn. "It was a bad day at the office and is unacceptable from our point of view.

"Kilmarnock set themselves difficult to beat and we've tried to break down but they've scored on the counter-attack with a switch of play.

"We tried to change things around and look for the goal in the second half but we didn't defend a corner very well and we find ourselves 2-0 down.

"It was not the kind of defending we've been used to. Defensively there has been massive changes since the start of the season.