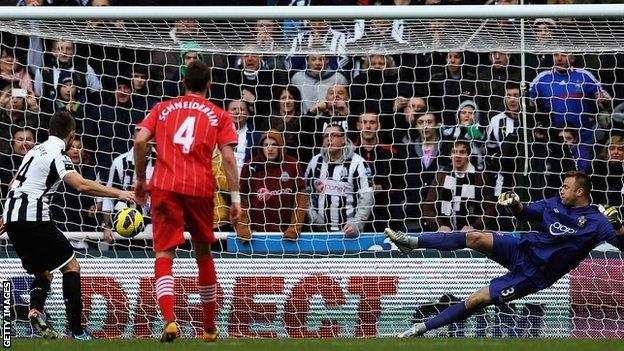 Newcastle came from behind to win an open and absorbing game against relegation rivals Southampton.

Morgan Schneiderlin lashed in a shot for the visitors before Moussa Sissoko equalised with a six-yard tap in.

A stunning 25-yard Papiss Cisse strike gave the Magpies the lead only for Rickie Lambert to sidefoot in a near-post cross to once again level matters.

It was the first time Newcastle had won a league game this season after conceding the opening goal and the victory moved them six points clear of the drop zone.

The performance also continued their upturn in form since they reinforced their squad with a number of signings in the January transfer window, with Alan Pardew's side claiming three wins from their last four top flight matches.

Southampton provided a severe test for their opponents but were brought back down to earth after beating champions Manchester City in their last game and they are three points above the relegation zone.

It was 'French Day' at St James' Park in honour of the club's heavy contingent of players signed from across the Channel but it was a Frenchman for Southampton who opened the scoring after just three minutes.

Jack Cork's diagonal cross from the right was nodded down by Lambert and Schneiderlin turned and half-volleyed a shot past Magpies keeper Rob Elliot, whose Premier League debut started in inauspicious circumstances.

"French Day at Newcastle has been an entertaining one. Papiss Cisse got the pick of the goals as the Magpies win to move six points above the relegation zone and above Sunderland."

Pardew was ruthlessly sacked by Southampton by the then-League One club in August 2010 and his team mirrored his desire to win the match as they pressed for an equaliser.

Both instances appeared to be more ball to hand than the other way around but indicated Newcastle were threatening a goal, which was deservedly provided by Sissoko.

The dancing and darting Yoan Gouffran's shot was saved by keeper Artur Boruc but Sissoko was on hand to slot in the loose ball.

The Magpies went ahead when Cisse, who might have initially been offside, produced a spectacular long range dipping strike on the half-volley after keeper Elliot had launched a long ball forward.

Southampton regrouped and equalised shortly after the break when Lambert turned in a low Adam Lallana cross at the near post for his 100th goal for the South Coast club.

Lambert nodded wide at the far post and Lallana put a left-foot shot a yard wide as the visitors took their turn to dominate.

And, when Fox's clearance from Davide Santon's left-wing cross inexplicably struck Hooiveld on its way into the Saints goal, the own goal secured Newcastle's victory.

Newcastle manager Alan Pardew: "You look at the Premier League table and we have now put ourselves in a position to attack 10th, and that was the importance of the victory [against Southampton].

"It wasn't about anything else for me, and that's how I tried to get the players' mindset.

"I said to them afterwards, we should attack the top 10 now, and we can with this team.

"What a considerable difference to six weeks ago it has made, the players coming back from injury and the new players."

Southampton boss Mauricio Pochettino: "We are very sad about the result, especially taking into account how well we started.

"But especially after we got the first goal, we couldn't really control the game as we should have.

"We went in at the end of the first half losing the game and for their second goal, it is clear that there was a foul on [Nathaniel] Clyne, and then that was followed up by an offside. That is clear on the images.

"It's not a complaint, but these are details that had an influence on the end-result of the match."

74 comments
Back to top
unknown