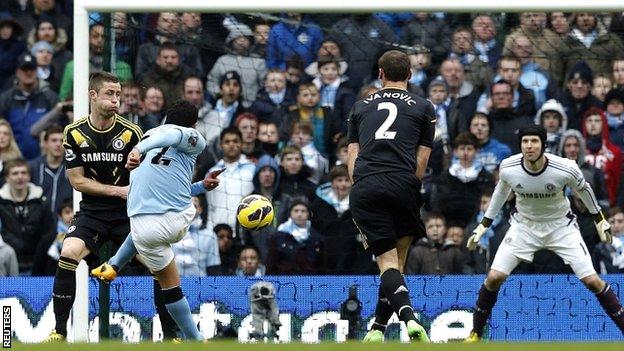 Superb second-half goals from Yaya Toure and Carlos Tevez helped Manchester City to a hard-fought win over Chelsea and reduced the gap to Manchester United at the top of the Premier League to 12 points.

City were rewarded for a more attacking approach in the second period, after a first half in which they missed countless chances, Jack Rodwell and Sergio Aguero both going close to scoring for the hosts.

They had almost paid for their wastefulness when Frank Lampard had a glorious opportunity to register his 200th Chelsea goal, but his penalty was saved by Joe Hart seven minutes after the break.

Eleven minutes later City were finally in front when Yaya Toure kept his composure in the box to steer an angled shot into the bottom corner from 10 yards.

Tevez made the game safe with a blistering shot from 20 yards five minutes from time.

Lampard was replaced by Victor Moses after a quiet afternoon for the 34-year-old England midfielder that largely typified Chelsea's attacking performance, their play only becoming more expansive once they had fallen behind.

They have now lost their last four games at the Etihad and trail second-placed City by seven points with 11 games to go. More importantly, they can now be overtaken by fourth-placed Tottenham, who face West Ham on Monday.

The champions' hopes of retaining their Premier League title still look slim, but this was the perfect response to the loss at Southampton in their last league outing.

Manager Roberto Mancini's name was sung throughout by the home supporters, and although there have been some signs the Italian is feeling the pressure of being so far behind Manchester United, the atmosphere was buoyant throughout a freezing afternoon.

The City boss has said goals are the difference between his and Sir Alex Ferguson's side this season, and before this encounter he demanded that his side begin at a tempo that would bring them an early breakthrough.

Yaya Toure seemed to have got the message, having a shot saved by Petr Cech within 42 seconds, and for much of the first period it was City who showed the greater attacking endeavour.

Rodwell, making his first start since September, returned to bolster the midfield and could have had a hat-trick by half-time.

But the best chance fell to Aguero, who attempted to round Cech when he was one on one, only to run the ball out of play. Cech also did superbly to stop Matija Nastasic's point-blank header.

The picture changed dramatically almost immediately after the break. Branislav Ivanovic picked out Ba, and the former Newcastle striker took a touch before being brought down by the onrushing Hart, who was not even booked for the foul when he might have been lucky to stay on the field.

Reprieved by the referee, Hart then redeemed himself with his team-mates as he dived low to his right to save well from Lampard's strike.

The impressive Rodwell immediately made way for another striker in Tevez and the game opened up as a result.

Aguero was played through twice but could not take either chance, leaving Yaya Toure - so often the man for the big occasion - to finally make the breakthrough.

Silva collected the ball close to the goal-line and played it back for Toure, who skipped round two challenges before curling the ball into the bottom corner.

After that, Chelsea at last looked the more likely team to score as Rafael Benitez brought on Moses and Oscar, but Tevez settled matters with his first goal in nine league games.

"When you lose, you have to be disappointed and this game was important for us because we could have been closer to Man City, but we cannot give up.

"We have to fight for the top four because Arsenal, Tottenham and Everton are close behind.

[On the penalty awarded for a foul by Joe Hart on Demba Ba] "I haven't seen the replay, but at least yellow card. You can argue he is going in this direction but it is still a clear chance. I think it was a turning point. We didn't do well in the first half but we went to half-time at 0-0.

"We were talking about keeping the ball, doing better and showing more character. Then we had the penalty. It was a crucial moment in the game."