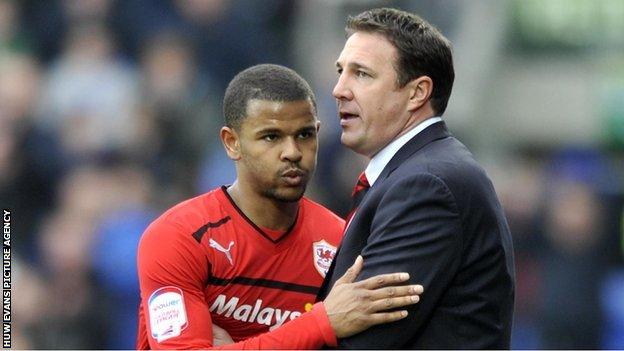 The 25-year-old marked his home debut, and his first start for the Bluebirds, with a goal in each half in Saturday's

Mackay believes the £650,000 January capture from Sunderland is still building his fitness after a lack of games before the move to south Wales.

"I am delighted for him, you could see the quality there," Mackay said.

"You could see the intelligence, the strength and the link-up play. And for him to get the two goals is obviously really pleasing for him."

Campbell's opener, a smart finish from Tommy Smith's clever through ball, broke the resistance of a stubborn Bristol City side late in the first half.

The once-capped England man then secured the points from inside the box after being found by Aron Gunnarsson's huge throw.

Campbell was replaced on 72 minutes to a standing ovation from the majority of the 25,586 fans, rising to acclaim their new goal hero.

"We knew he was going to have to come off the pitch, his whole body cramped up in one big go!" Mackay added.

"More than anything I am delighted about the lack of ego about the boy and the way he has thrown himself in to everything that we do here.

"He has bought into it and he has grasped it. I felt it was time to start him and it is about bleeding him in gently.

"He has not played a lot of football in the last few months and we have to treat him properly as he builds up to match fitness.

"I don't doubt the type of footballer we have got, it is about making sure we get him into the team in the correct way."

Victory in the Severn derby kept Cardiff eight points clear at the top of the Championship table, although they have a game in hand on second-placed Hull City.

The Bluebirds are back in action on Tuesday night, when a Brighton and Hove Albion side just outside the play-off places come to Cardiff City Stadium.