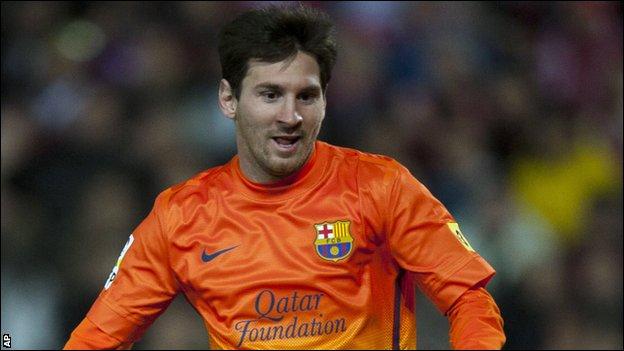 Lionel Messi scored his 300th and 301st career goals for Barcelona as the Spanish side beat Granada 2-1 on Saturday.

He also extended his scoring run to 14 league games and took his tally for the season to 37 league goals.

Barcelona remain on course to reclaim the league title with a 12-point lead over Atletico Madrid.

In total Messi has scored 44 goals in all competitions this season, including a hat-trick in Barca's 5-4 win over Deportivo and four goals in the recent 5-1 win over Osasuna.

He has also scored 14 braces so far and been booked just once.

The Argentine forward, who signed a two-year contract extension earlier this month, enjoyed a record-breaking 2012 for club and country, scoring 91 goals.

He surpassed Gerd Mueller's 40-year-old record of 85 goals scored in a calendar year with a brace in a 2-1 win over Real Betis on 9 December.

His form saw him awarded the Ballon d'Or for a fourth year running ahead of Barcelona team-mate Andres Iniesta and Cristiano Ronaldo of Real Madrid.