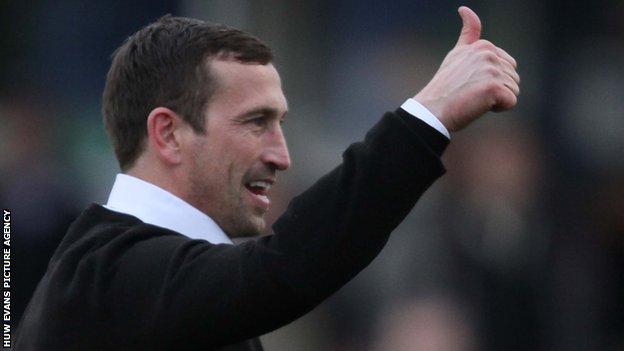 Newport County are firmly back in the hunt to win the Blue Square Bet Premier title after a "fantastic" win over Woking, said manager Justin Edinburgh.

Two goals from Lee Minshull and one from Byron Anthony secured a 3-1 win.

County moved to within two points of leaders Grimsby, but stay in fourth place in a congested title race.

"I'm thoroughly delighted for the players because they've worked hard and they've really put us back in for that title race now," said Edinburgh.

County started the week eight points adrift of Grimsby, but they capitalised on the leaders' inactivity to make significant inroads into the deficit by winning their two games in hand.

It started with a 2-0 home win over sixth-placed Mansfield on Tuesday, followed by a comfortable victory over another in-form team at Woking, who had won six of their last seven games.

"Games in hand only count if you win and that's six points from two of them," said Edinburgh.

Minshull laid the foundations for the victory with two goals in 15 first-half minutes, taking his goal-tally to three for the season in only his 14th league start.

"I've been a bit in and out but I just try to do well when I get the opportunity," said the 27-year-old midfielder.

"Obviously Max [Porter] has been quite consistent for us and now that he's out other people have got to step up to the plate and hopefully I've done that."

The two victories, and the preceding home draw with Tamworth, were achieved without 19-goal top scorer Aaron O'Connor.

But the prolific striker is nearing a return from injury, and Edinburgh also has new recruit Rhys Griffiths to call upon after signing from League Two side Plymouth Argyle.

"We've got to get them fit before we start selecting them but what they give us is options," said Edinburgh.

"Danny Crow and Christian [Jolley] have linked up well in the last couple of game but as a manger you need every player that you can.

"We had five players missing [at Woking] and four of them would probably be starting in the team so that's a fantastic result for us."