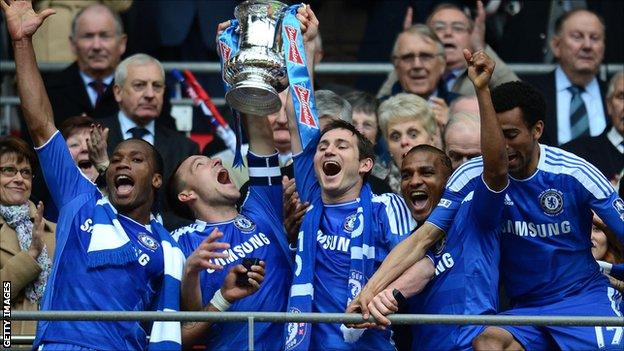 Manchester United will face Chelsea in a mouth-watering FA Cup quarter-final after Rafa Benitez's side progressed through their fifth-round tie.

Chelsea defeated Middlesbrough 2-0 on 27 February and will now face United in a repeat of the 2007 final.

Everton host Wigan after defeating League One Oldham in a replay.

Premier League champions Manchester City host Barnsley, while Millwall are at home to Blackburn Rovers in the only all-Championship tie.

The ties will take place on the weekend of the 9 and 10 March.

Chelsea, who are looking to win the competition for a fourth time in five years, secured their place in round five with a 4-0 fourth-round replay defeat of Brentford. before defeating Boro in their fifth-round tie.

"Every team plays in the FA Cup like it is in a Champions League final," he said.

"The cup is an important trophy in England. Teams may change players in the Capital One Cup but in the FA Cup every team plays seriously.

"You could play in a final at Wembley in front of more than 80,000 people so that has to be good."

Blackburn sealed the weekend's biggest upset after they defeated Premier League giants Arsenal 1-0 at the Emirates. They travel to fellow Championship side Millwall.

The ties will take place on the weekend of the 9 and 10 March.