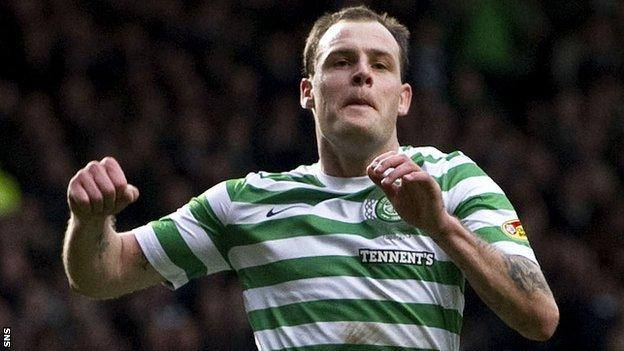 Celtic forward Anthony Stokes feels he is making up for lost time this season after netting three goals in his last four appearances.

And manager Neil Lennon has hinted at a contract extension for the striker.

It's always nice to wrap it up as early as possible

"I'm judged on goals and that's what I look back on at the end of the season," said the 24-year-old.

"I know I will have to perform in training and when I get my opportunity on the pitch.

"If you are hitting over 20 goals you are having a reasonably good season but it's hard now, coming back from injury and missing so many games, but I just want to score as many as I can before the end of the season."

The impressive defeat of United stretched Celtic's Scottish Premier League lead to 18 points and Stokes insists his side "won't be taking our foot off the pedal until the end of the season".

"We demand it from ourselves to perform in each game and fans want to see us winning every game," he added.

"It's always nice to wrap it up as early as possible but even if we do we are going to be expected to win every game anyway so, whether we sew it up early or not, I don't think it is going to change the mentality of how we go into the games."