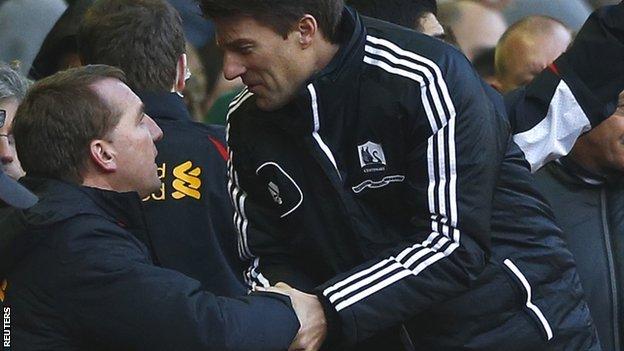 Swansea boss Michael Laudrup apologised to fans after they slumped to a at Liverpool.

The Dane had named a weakened side in an attempt to keep players fresh for next Sunday's Capital One Cup final against Bradford City.

"It was a nightmare; we got slaughtered out there," Laudrup admitted.

"First half we were still in the game but to give away three goals like that in 10 minutes at the start of the second half was terrible - we have to say sorry to the fans."

The Swans trailed 1-0 at half-time to Gerrard's penalty, awarded when Kemy Agustien was adjudged to have brought down Suarez.

But Coutinho, Enrique - finishing off the move of the match - and Suarez found the back of the Swansea net in quick succession after the restart.

Sturridge's penalty, after Wayne Routledge had clumsily handled the ball in the area, rounded off a miserable afternoon for the Welsh side.

Despite opting to leave the likes of top scorer Michu and Wales captain Ashley Williams on the bench, Laudrup said it was the performance rather than the personnel that was to blame.

"Only in a couple of positions I wanted to leave a few out, but that's not an excuse," Laudrup added.

"We are all to blame, starting with me and the players.

"Michu and Ashley Williams were left out ahead of the final but that's only a part of it, there were a lot of good players out there.

"In the last two and a half months we have made a lot of changes and we have been competitive.

"You can't play like that. We just have to go, it wasn't what we wanted in the build-up to the final but... we have to get back on the horse.

"I learned a lot today, a lot for the future. I saw some things today that is important for me for the future, but really for me it was a very bad day.

"We are looking forward to that final, it will be a completely different game.