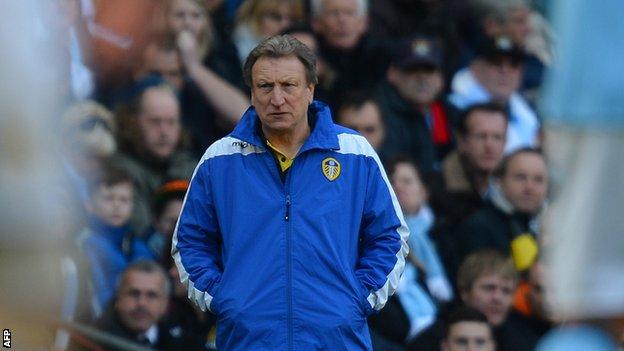 Neil Warnock admits his reign as Leeds United manager will be over if he fails to win promotion this season.

The 64-year-old hinted that his time at Elland Road could even end sooner as new Dubai-based owners GFH Capital plot the club's future course.

"If we do not go up this season then I think everybody knows I am not going to be here," he said.

"I am afraid I am going to have to get used to the chanting. I do not think I deserve that after the year I have had."

Leeds currently lie in 12th place in the Championship, eight points short of the play-off places with 15 matches remaining.

Former Southampton manager Nigel Adkins has been touted as a possible replacement and Warnock - whose contract expires at the end of the season - added: "It has happened to me at three clubs - three takeovers at Crystal Palace, QPR and now Leeds.

"Something has got to be wrong somewhere. That seems to follow me around."

He was appointed Leeds manager exactly a year ago on Monday after being sacked at Loftus Road.

Frustration has grown among the club's supporters, who chanted "time to go" at Warnock as early as the league defeat to Barnsley on 12 January.

Warnock said: "The fans are so desperate to get back in the big time and when they see the opportunity fading the manager has got to be the scapegoat, the focal point.

"Someone wrote that they wanted a younger manager so I suppose that rules out [Manchester United's] Sir Alex Ferguson.

"If we do not go up I will not be here. I think the fans have known that all along.

"I think the club will be sensible about it and I do not want to leave them in the lurch. In the next couple of years I am sure they will be back in the big time.

"My contract ends this season and there is no way I want to stay in the Championship again next year."

Asked whether the club's new owners may make a move earlier he said: "It is their prerogative. If I can help them I'm not against that.

"It is about what is best for Leeds United. With what has gone on behind the scenes over the last 12 months I think I deserve a medal."