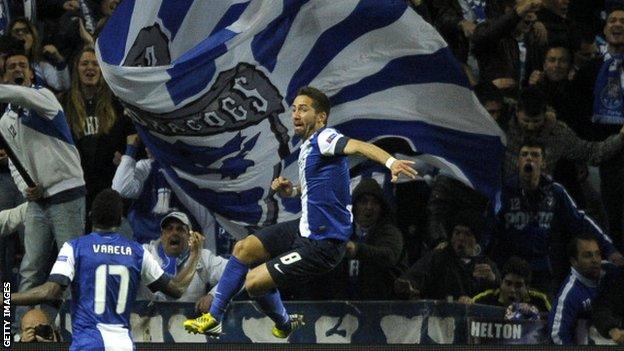 The home team dominated throughout in what was a one-sided match, restricting a defensive Malaga to one shot on goal.

But Porto could not make the most of their overwhelming possession until the impressive Moutinho coolly side-footed Alex Sandro's cross beyond Willy.

The strike ended Malaga's unbeaten record in the competition.

Porto had not lost a game at Estadio do Dragao in the Champions League since 2009 when Chelsea were the visitors.

Malaga lacked belief and adventure and were a shadow of the side which had qualified for the knockout stages unbeaten and four points clear of seven-time champions AC Milan.

The Portuguese hosts controlled the match, monopolising possession and bullying the visitors in midfield - so much so that they did not trouble Helton in the Porto goal.

Despite their dominance, however, Vitor Pereira's men only had a couple of noteworthy chances in the first half - a low driving effort from Marat Izmailov and a Silvestre Varela header.

Porto struggled to breach a defence which has conceded merely seven goals on their travels in La Liga, but without possession, it was of no surprise that Malaga's attacking talents of Julio Baptista, Isco, Joaquin and Roque Santa Cruz failed to flourish.

The Spaniards' forwards were equally as redundant in the second half as Porto continued to dictate.

The lively Izmailov, at full stretch, once again going close before the home team's efforts were eventually rewarded through Moutinho.

Sandro, skipping down the left, bisected the Malaga defence with a fabulous low cross which Moutinho, timing his run to perfection from midfield, coolly finished beyond goalkeeper Willy.

Replays showed the midfielder may have been offside, but that will worry the two-time European champions little as they head to Spain in three weeks' time for the second leg a goal to the good and, importantly, having stopped their opponents from scoring an away goal.

But the tie remains delicately poised and Manuel Pellegrini's men will be hopeful of getting the better of Porto at La Rosaleda, a ground where they beat both AC Milan and Zenit St Petersburg in the group stages.