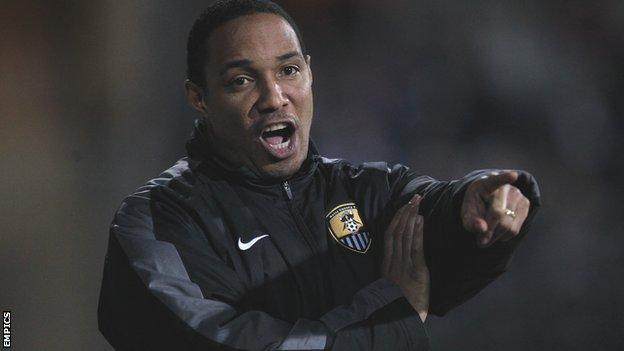 Blackpool have appointed Paul Ince as manager on a one-year rolling contract.

The 45-year-old, who has been without a job since leaving Notts County in April 2011, will become the club's third permanent manager of the season.

Ince links up with his 21-year-old son Tom, who has scored 17 goals in 33 appearances this season.

"It's strange sitting here as the manager, having obviously watched Blackpool as a fan as well as watching my son play," he told the club website.

"I'm over the moon though and delighted, it's great to be back on the training ground and great to be involved with, and in charge of, a great bunch of lads."

The Seasiders are 14th in the Championship, 10 points from a play-off spot and six above the relegation zone.

Ian Holloway and Michael Appleton had spells in charge at Bloomfield Road earlier this season.

for Crystal Palace, while his replacement Appleton was at the helm for just nine weeks before

Despite being bottom of the Football League when he took over, he helped the club avoid relegation on the final day of the 2006-07 campaign.

His success with the Silkmen saw him move to MK Dons, with whom he won the League Two title and the Football League Trophy.

With his stock rising, Ince was announced as manager of Premier League side Blackburn in 2008, but was dismissed from the Ewood Park post having won just three of his first 17 league games.

Another year at MK Dons followed