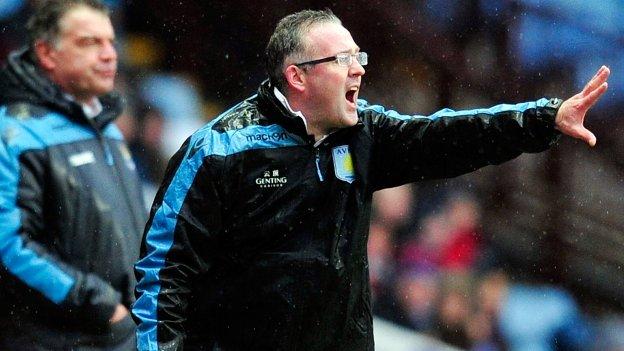 Paul Lambert says his Aston Villa side must be prepared for "12 cup finals" as they battle to avoid the drop from the Premier League.

The Birmingham side are currently 17th, a point above 18th-place Reading, as they go into Saturday's match at Arsenal.

Consecutive seasons in the top-tier of English football

"There's no point in looking back and thinking, 'We should have got points here and there'," said the Villa boss.

He added: "We lost two-goal leads against Manchester United, West Brom and Everton. It's tough when that happens because those points could have made a major difference.

"We have to be ready for it and win more times than not."

Villa, who did not play at the weekend, go to their 27th league fixture of the campaign on the back of a victory against West Ham.

Lambert is confident his side can build on that success.

"The feeling to try to win is there," said the 43-year-old former Norwich manager. "When you get knocked and knocked at every opportunity, you have to take the game by the scruff of the neck and influence it.

"The last few games we have thought, 'We'll have some of this'. You can't go out and play football like it's a hobby.

"It's your job to win. The confidence is high at the moment."