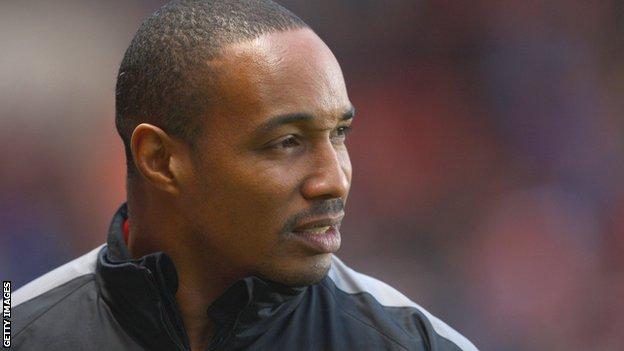 Management was another trail Ince wanted to blaze, but high-profile failures with Blackburn and Notts County have meant it has proved to be a far bumpier road.

His first job with Macclesfield was a case in point, with Ince taking over a club seven points adrift at the bottom of the Football League. But they survived.

His reputation grew further with Milton Keynes Dons, where his team played a brand of fluent and attractive, passing football far removed from the usual League Two fare. The Johnstone's Paint Trophy and promotion to League 1 followed - as did interest from the Premier League and Blackburn.

But the move to Ewood Park was to prove ill-fated - three victories in 17 games sealing his fate. A second spell with MK Dons ended prematurely before a record nine defeats in a row at Notts County completed Ince's fall from grace. "The hardest thing is facing people after you've lost your job," Ince said at the time.

"I'm a proud man. I want to succeed. I didn't at Blackburn, for many reasons. Then you've got to go down the golf club and face people. I felt like I'd failed."

But having spent the past two years on the sidelines, the 45-year-old is back in the game with Blackpool and will be determined to beat a new path, according to a man who knows him well. "Paul is a leader, he is dynamic, he is a fighter and a fantastic character," Peter Winkleman, Ince's former chairman at MK Dons, told BBC Sport.

"I have great memories of watching him work with the players out at our training ground and I know he will be relishing getting back out there because he is football through and through. It is fantastic to see him back in the game he cares so much about.

"We have such fond memories of Paul. He gave us our best ever season in 2007-8. We watched him go to Blackburn and that was difficult but we are still working with Karl Robinson, Paul's protege, so we are still feeling the benefits of his time here."

Ince hasn't rested on his laurels, having worked towards his Uefa Pro Licence coaching badge at St George's Park during his time away from the game.

He will need all his skills at Blackpool, with the Championship club just six points above the relegation zone and 10 points from the play-offs. But it is a position that, aside from the opportunity to work with his son Thomas, provides Ince with a path to redemption and an opportunity to right the wrongs of the recent past.

"He has had something of a mixed record in management," former Blackpool and England footballer Jimmy Armfield told BBC Sport.

"But he was in the learning process and this is a chance to show that testing period is over. His first job will be to arrest the slide, because they have been sliding for two or three months now and everyone is aware of that.

"The chairman is probably looking up the table because they can all see the pot of gold but his first job has to be to make sure they start moving in the right direction again."

The former England and Manchester United midfield player has known greater pressure than anything he will find in football, of course.

Ince, a cousin of world middleweight boxing champion Nigel Benn, had to fight for everything growing up. He was brought up by an aunt in a two-bedroom council flat after his father left home when he was two. His mother left eight years later.

His early life, and the many crushing setbacks he endured, forged a belligerence and steel in his personality and ultimately crafted one of the most effective English footballers of the 1990s.

But the lack of stability in Ince's life led him to seek the companionship of gang life from the age of 13 to 17. Drinking and fighting was an accepted part of life and the temptation of drugs and crime ever present.

At the age of 17, the police arrived at West Ham's training ground after a fight that left the victim with broken ribs. John Lyall, the then West Ham manager, spent an hour persuading the authorities not to press charges but only if Ince agreed to apologise to the police, the victim and his parents.

For the next month, Ince was forced to paint the training ground gate claret and blue and creosote the fences. It was to prove a turning point in his life.

The scrutiny on Ince has always been all the more intense because he has been a pioneer.

This move to Blackpool has opened Ince up to the possibility of another failure but the man himself is determined to show that he has finally learnt what it takes to be a real governor.