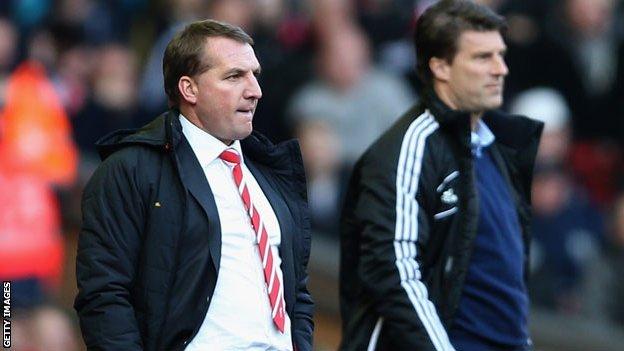 Brendan Rodgers is tipping his former club Swansea City to win the League Cup final on Sunday, despite crashing 5-0 to his current team, Liverpool.

Swans boss Michael Laudrup apologised to fans for the "nightmare" at Anfield on Sunday, saying "we got slaughtered".

But he added: "Hopefully they can replicate the last Wembley trip and win."

Swansea's previous Wembley encounter was to return the club to the top flight for the first time in 24 years, with a 4-2 victory over Reading in the 2011 Championship play-off final.

But the Welsh club were far from glory in the Premier League at the weekend with their slump to Liverpool - albeit with a weakened team as Laudrup attempted to keep key players fresh for what they hope will be their first major trophy.

Laudrup had opted to leave top scorer Michu and Wales captain Ashley Williams on the bench against Liverpool.

Nevertheless, Rodgers said he had instructed his players not to underestimate the club he left in May 2012 for Merseyside, and that the Welsh club are still favourites and under pressure to win on Sunday against League Two's Bradford.

"They'll go into the game as clear favourites, for sure," Rodgers said.

"Bradford - obviously I know [manager] Phil Parkinson well and he's done outstandingly well to get his team there.

"They've beaten Premier League teams before and as you've seen in the final last year, Liverpool v Cardiff, they can be tough games so I'm sure it'll be tight, but if you look at the quality of the Swansea team, and the players, hopefully they can replicate the last Wembley trip and win."

Rodgers said Swansea now needed to "regroup again and refocus and get it defensively right".

He added: "It's something I'm sure they'll prepare well for this week and hopefully they'll go to the final with high hopes to get their first trophy."