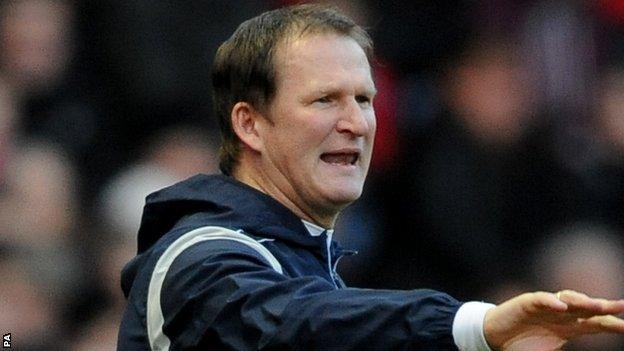 The 43-year-old replaces Graham Westley at the League One club, last week after only one win in the league since November.

"It's a club that has got fantastic tradition and history," Grayson told BBC Radio Lancashire.

"And hopefully we can be the ones to take them back to where everyone wants to be."

Grayson, who has only been out of a job since he was on 24 January, will have former assistant Glynn Snodin in his coaching set-up.

"I'm a football person and I love working," continued Grayson. "I had a holiday last week but I was starting to get itchy feet already.

"I love working, I love football and when I spoke to a few people about if I had an opportunity to go back into the game quickly they said 'take it', because you can be out of work a long time.

"It wasn't so long ago that this football club was in the play-off positions for the Premiership, never mind to get into the Championship.

"We want to come into the football club and try to recreate that positive place, the passion among the supporters and the performances from the players which will gather the spirit of what Preston North End is all about."

John Dreyer, who had been in caretaker charge, will also remain at Deepdale.

Dreyer, who was assistant to previous boss Westley, led the Lilywhites to their first home league win since 29 September in his only game in charge, against Bournemouth on Saturday.

Simon Grayson has led three clubs to promotion out of League One - Blackpool, Leeds and Huddersfield

He takes over a Preston side lying 17th in League One, eight points above the relegation zone.

Grayson, who made over 400 league appearances for nine different clubs including Leicester, Aston Villa, and Blackpool, moved into management with the Seasiders in 2006.

In his first full season in charge at Bloomfield Road, he steered the club to promotion to the Championship via the play-offs.

After one season in the second tier with Blackpool, Grayson moved to Leeds United, the club where he began his playing career, and led his second club to promotion from League One in 2010.

However, after one-and-a-half seasons in the Championship with the Elland Road side, Grayson was sacked in February last year following a 4-1 defeat by Birmingham.

Just three weeks later, he was back in management in Yorkshire at League One side Huddersfield, following the departure of Lee Clark.

And once more Grayson proved his worth in League One, guiding the club to the Championship via the play-offs last May.

After a run of 12 consecutive league without victory, he was sacked from his post at the John Smith's Stadium.