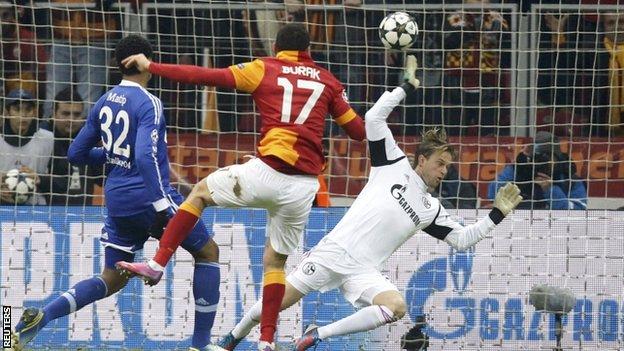 Schalke grabbed a valuable away goal at Galatasaray as they drew the first leg of their last-16 Champions League tie.

The Turkish side took an early lead through leading striker Burak Yilmaz, who smashed his effort past Timo Hildebrand from just inside the area.

But shortly before half-time, the Bundesliga visitors levelled when Jermaine Jones thrashed in following a brilliant counter-attack.

The home side went close to a when Hamit Altintop's strike struck the bar.

The Turkey international midfielder was one of the better Galatasaray players, while former Chelsea striker Didier Drogba and goalscorer Burak combined well in attack.

Fatih Terim's side began well but faded in the second half, whereas Schalke boss Jens Keller, whose side is struggling in the German league, will have been delighted with the performance of his men.

The ex-Schalke defender would not have been impressed with the way his side began though.

Dany Nounkeu fired in a fierce shot for the hosts, which Hildebrand had to palm away, but the visitors did not hold out for long and their defence was breached with just over 10 minutes played.

Drogba, Chelsea's hero in the penalty shoot-out in last year's final, was the catalyst. The Ivorian found Selcuk Inan who in turn played the ball to Burak. Galatasaray's top marksman flicked the ball over his head, outwitting the defence in the process, before emphatically firing the ball past Hildebrand.

It was Burak's seventh goal in the Champions League this season - Galatasaray have only scored eight in total.

Istanbul's premier side should have added a second soon after when Drogba's firm strike, from the angle, was pushed into the path of Altintop, who arrived like an express train but smashed the rebound onto the bar.

At 2-0 down Schalke might have found their task too difficult at the intimidating Ali Sami Yen, but instead their lucky escape sparked them into life.

Semih Kaya caused his Galatasaray team-mates' hearts to skip a beat when he almost turned Jefferson Farfan's cutback into his own net.

But the hosts luck was out when a mix-up between Brazilian Felipe Melo and Cameroon's Nounkeu led to a rapid break which ended with Farfan laying a square ball into the path of Jones, and the ex-Blackburn player finished with a firm shot past Fernando Muslera.

There were fewer chances after the break, with a poor pitch not helping the players' cause.

Netherlands forward Huntelaar should have kept his shot low when he connected with a pass from Julian Draxler, who then fancied his own chances, but drilled a shot a foot wide of the post.

Galatasaray barely had a sniff, although Burak was unlucky to see his firm, angled drive from Drogba's nod-down miss the Schalke upright by inches.