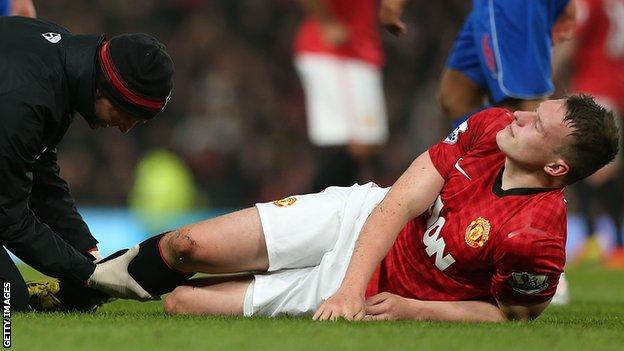 The England international, 20, left Old Trafford on crutches after a first-half tackle on Jobi McAnuff.

"We'll have to assess it [on Tuesday]," Ferguson said.

Jones did an impressive job against Real Madrid's Cristiano Ronaldo when United secured a 1-1 draw at the Bernabeu in their Champions League last-16 first-leg clash.

Ferguson is hoping that the versatile former Blackburn man, who was playing at right-back against Reading, will be fit for the second leg against Madrid at Old Trafford on 5 March.

"We'll have to assess him. It's an ankle injury obviously so I'd imagine he'll not be ready for Saturday anyway," Ferguson continued.

Ferguson's concern over Jones' fitness was tempered by his delight at a return to form from Nani.

The Portuguese winger replaced the injured Jones to score one goal and set up Javier Hernandez for the crucial second.

"He's got great talent, we know that," said Ferguson.

"I had a feeling he would win the game for us. You could see he was right on form the moment he came on.

"He had two great strikes immediately and was a threat to them the whole night.

"It's a good addition. If he keeps that form it makes my job more difficult now."

Reading can now concentrate on their fight to avoid relegation from the Premier League.

They currently sit third from bottom, one point behind Aston Villa, and face fellow strugglers Wigan on Saturday.

Manager Brian McDermott said: "We really wanted to put on a performance for our fans and we have done that.

"Now we can look forward to Saturday's game against Wigan."