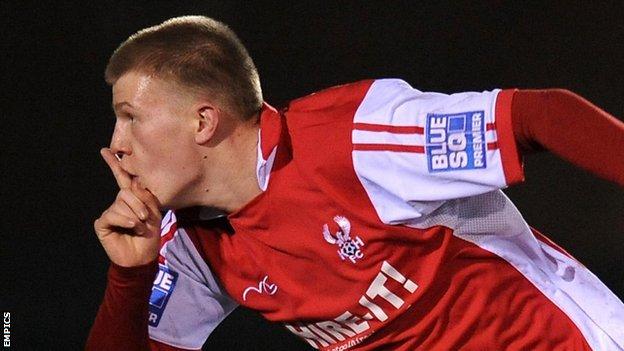 Rampant Kidderminster Harriers made it 15 wins from 17 league games to keep up the pressure on leaders Wrexham at the top of the Blue Square Bet Premier.

After a dire first half, home keeper Lee Burge made a string of second-half saves to keep his side on level terms.

He was finally beaten after denying Kyle Storer and Ryan Rowe, only for top scorer Malbon to steer in the rebound.

After a slow start to the season, it was Malbon's sixth goal in five games, and his 11th of the season, to complete a happy return to Nuneaton for former Boro boss Steve Burr.

Harriers keeper Danny Lewis had a quiet night, but he did have to remain alert eight minutes from time, diving low to his left to turn away Simon Forsdick's shot.

After successive wins in their previous two games, defeat for Kevin Wilkin's Boro keeps them in the relegation zone, level on points with 20th-placed Gateshead.

"We expected a tough game, with Nuneaton fighting for their lives to stay in this division. They're clearly working hard for Kevin Wilkin. He's got them organised. But the way they started I couldn't see them keeping it up for 90 minutes.

"We didn't do enough in the first half but we changed things round and always looked likely to score after that. And, once we did score, we settled down.

"I must congratulate the groundsman here. For a club who also have a rugby team playing on it, the pitch was tremendous. It's one of the best surfaces we've played on in this division."