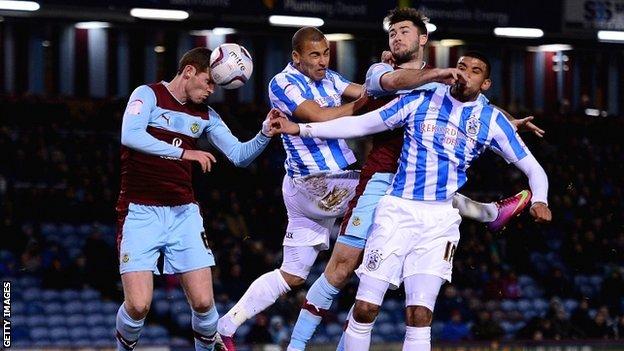 The Terriers had scored just once in the previous four league fixtures but Vaughan stabbed home after Adam Clayton's effort was saved.

Sam Vokes hit the bar for Burnley with Danny Ings and Charlie Austin both wasteful in front of goal.

Burnley have not won in six games.

The victory was Huddersfield's first at Turf Moor in 41 years but it was Burnley who looked more promising in an uninspiring first half as Keith Treacy's swerving shot almost squirmed under Alex Smithies in the Terriers goal.

Vaughan's goal was his seventh of the season for Huddersfield. He needs just two more to match his best haul for a season registered while at Crystal Palace two seasons ago.

Another effort by Treacy deflected into Austin's path but the ex-Swindon forward sliced wide.

The breakthrough almost came less than five minutes after the break when Antony Gerrard's costly slip saw Austin set free but the striker appeared to be caught in two minds as his delicate chip floated wide.

The visitors, who had yet to threaten Lee Grant's goal, took a shock lead in the 55th minute courtesy of on-loan Norwich striker Vaughan.

Sean Scannell's cross came out to Clayton and he planted a left-foot shot at Grant, whose save squirmed into the air and allowed Vaughan to stab home.

Burnley brought on Marvin Bartley and it almost paid dividends as he bent a beautiful ball in to Vokes, who flashed his header against the crossbar.

Clayton then blocked an Ings chance as the Terriers showed a defensive steel which had been absent in recent weeks.

"I'm disappointed more than frustrated. It's a very poor performance, simple as that. Unacceptable.

"The only thing we can assure is we need to improve on that, we need to go hard because there's enough games to make it into the play-offs.

"But it's a big challenge now."

"I'm just thankful we managed to get our noses in front, hold the lead and get the three points.

"It's four points from two games and two clean sheets and long may it continue."