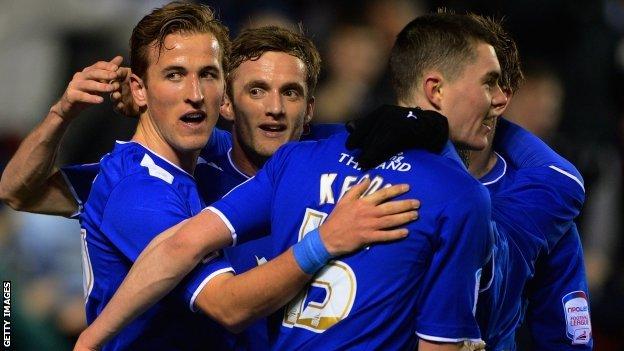 Leicester kick-started their automatic promotion push as they comfortably saw off Blackburn to end a run of four matches without a win.

Chris Wood nodded in his ninth goal in as many games for the Foxes before Harry Kane headed in on his home debut.

Goalkeeper Kasper Schmeichel saved well from Morten Gamst Pedersen, but had little to do for the rest of the first half.

Leicester move to within five points of second-placed Watford with a game in hand over Gianfranco Zola's men.

Kane, signed from Tottenham on loan until the end of the season, made an immediate impact with a mazy run and shot bringing a good save out of Blackburn goalkeeper Jake Kean early on before his header dropped just wide.

Another loanee, Michael Keane, should have broken the deadlock as he contrived to miss the target from six yards, but Nigel Pearson's side did not have to wait long.

Ben Marshall's deep cross was well met by Wood and the same player was the provider for the second, picking out Kane at the far post 13 minutes later.

Blackburn had mustered little more than Pedersen's deflected volley and a couple of long-range efforts from David Bentley in the first half and could not rouse themselves to a comeback after the break.

Instead Leicester could have added a third though Kane's volley and Marshall's swerving shot.

Lloyd Dyer, on as a substitute, almost picked his way through the visitors defence after being thrown on by Nigel Pearson, but it was King who finally completed the win as Rovers again failed to deal with a Marshall delivery and the forward glanced in at the near post.

Leicester boss Nigel Pearson: "It is good to get back to winning ways, It was an important win for us and it keeps us in touch.

"We have still got a bit of ground to make up, but at least our destiny is in our own hands.

"It is good to bounce back and I am very pleased with the overall performance. We worked very hard and it was thoroughly professional."

Blackburn boss Michael Appleton: "We were beaten by the better side, but who knows what might have happened had we not witnessed a world-class save.

"The goals we conceded were a big disappointment for me, it was unlike our players. But it is hard for me to be too critical of the back four because they have been magnificent while I have been at the club."