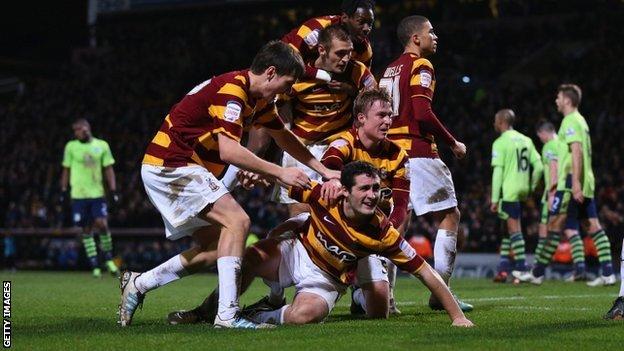 Bradford joint chairman Julian Rhodes says he would rather win Sunday's League Cup final against Swansea than promotion from League Two this season.

City are the first fourth-tier side to reach a major Wembley Cup final but have been in League Two since 2007.

However, Rhodes told BBC Sport: "I'd take winning the cup over promotion.

"It would be great to win promotion and I hope we can but I'm not expecting it and I'm not putting any pressure on [boss] Phil Parkinson or the players."

Despite City's historic run to the final, during which they have beaten three Premier League sides in Wigan,Arsenal and Aston Villa, Rhodes is realistic about his club's chances of becoming the first from the fourth tier to win the tournament and qualify for the Europa League.

"It is probably one of the greatest achievements in English football," he stated. "A fourth-tier team getting to a major Wembley final - this is massive.

"Obviously we are going hoping to win and we will prepare in the right way but the chances are we are not going to win.

"But even if we get murdered at Wembley it's going to be a great day out."

Bradford are currently 11th in League Two, eight points outside the play-offs after a slump in form - which has seen them win just two of their 10 league games - following their quarter-final victory over Arsenal on 11 December.

Five league defeats in that time, including last Saturday's 2-1 loss at the Football League's bottom club AFC Wimbledon, has seen the Bantams drop from fourth with a return of nine points from 10 games.

In the last couple of months, City have also been knocked out of the FA Cup, by Brentford, and the Football League Trophy, by Crewe.

However, while accepting that the Capital One Cup run has had a detrimental effect on their league form, Rhodes pointed out the financial benefits to a club that has twice been in administration since being relegated from the Premier League in 2001 and finished 18th in the bottom division in each of the last two seasons.

"This cup run means we can assemble a strong squad for next season and we want to go up in the automatic places," he added. "League Two promotion can wait until next season.

"By the end of the season we'll have made a profit of around £1.5m. Not all of that has come from the cup run - we have deals in place meaning we get money from Liverpool when Andre Wisdom plays and similarly with George Green at Everton.

"The money we have won will not change us - it's not an earth-shattering amount but it means we can have another tilt at League Two promotion next season if we don't achieve it this time."