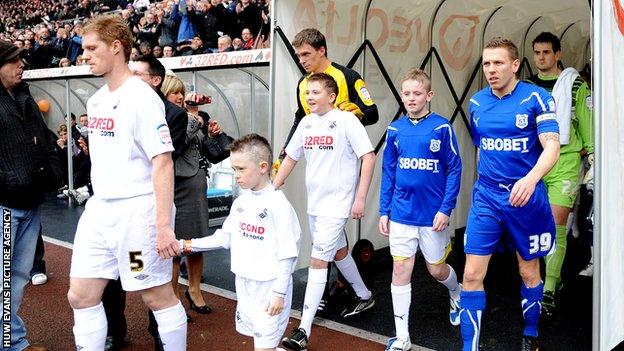 Cardiff City manager Malky Mackay admits the prospect of a derby against Welsh rivals Swansea is an incentive to reaching the Premier League.

Leading the Championship by eight points with 15 games remaining, the Bluebirds are favourites for automatic promotion to the top flight.

The two clubs last met in 2011 when Cardiff won 1-0 at the Liberty Stadium.

"Certainly playing in a derby against them [Swansea] would be something I'd really like to do," said Mackay.

Cardiff hope to go a step nearer promotion by beating Brighton at the City Stadium on Tuesday.

And Mackay is hoping to follow Swansea's example when they reached the Premier League in 2011.

Swansea City are in their second season in the Premier League and are currently eighth in the table.

"It's something [promotion] we will try to keep working towards. Brendan [Rodgers] and Swansea did that and great credit to them in getting the club into the promised land.

"It's been an 18-month journey down here to try and do that so far and it's something we are fully focused on.

"It's really pleasing to be in that situation [eight points clear]. We know there are a lot of games to go and a lot of points to play for, but delighted we have got that gap.

"The players have been nothing short of excellent in their professionalism."

Mackay is delighted with the state of Welsh football.

Not only is there the prospect of two clubs in the Premier League next season, but on Sunday Swansea City play in the Capital One League Cup final, against Bradford, a year after Cardiff City reached the Wembley showpiece.

In 2011 Cardiff City lost out in the final to Liverpool on penalties.

"I think it is fantastic for the country," said Mackay.

"I think it's fantastic for Wales."